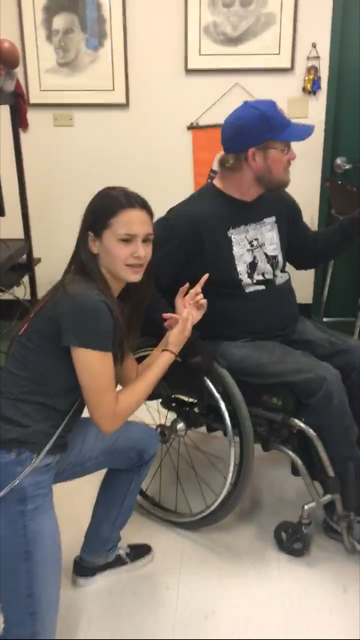 Ready, Set, Freeze! Staying in their pose, Cyenna Maldonado, a history student and Mr. Ashby are set side by side; ready to take on the Mannequin Challenge.

Social media is always good for some viral fad like the Ice Bucket Challenge, the water bottle flip, or doing the Dab. The Mannequin Challenge is the newest viral sensation to take over the internet, and it seems that everyone is doing it, even Michelle Obama and Lebron James.

The Mannequin Challenge consists of a group or big crowd staying still while being recorded, followed by the theme background song “Black Beatles” by Rae Sremmurd.

The song, “Black Beatles” by Rae Sremmurd had no meaning at the start of this challenge. But, it soon after became the theme song for the “Mannequin Challenge” when a group of students from Edward H. White High School in Jacksonville, Florida started challenge. On October 26, 2016, the group uploaded it to Twitter and asked everyone to share it, calling their video the “Mannequin Challenge”, since they had to stay as still as mannequins.

The Mannequin Challenge has spread globally, even to the corners of Alisal High School. Mr. Ashby’s fifth period World History Class decided to take on this challenge themselves. Beforehand, Ashby didn’t know about the Mannequin Challenge until junior Beatriz Maravillo mentioned it in class. Ashby’s fifth period had extra time at end of class, so they decided to take part in the challenge. Ashby said, “Sometimes you have to not be 100 percent serious and be a little goofy in class, life, and as a student.”

Maravillo, who mentioned the challenge to Ashby, believed this served as a way to grow closer to one another. Maravillo said, “Health Academy is like a family, we just wanted to have fun and seeing everyone hyped and gathering ideas was definitely a warm family feeling.” When asked if her mentality changed about the Mannequin Challenge she answered, “Well, first I saw it as something fun, yet silly but then afterwards I saw it as something idiotic and something that was done only in the moment.” But, not everyone had that “hyped” feeling towards doing the challenge. Opposed to the way Maravillo thinks, junior Lesly Zavala, a student that was a part of the challenge did not enjoy it. Zavala states, “Even though I was apart of it, I thought it was boring. I just don’t see the point to it and I didn’t have fun.”

The experience the students in Ashby’s class had inspired some to do their very own video.

Junior Evelyn Maravilla, a student of Ashby’s, decided to do her own video with a group a friends. She says, “I was at Starbucks with some friends working on a school project and we got bored, so we decided to do the Mannequin Challenge.” Maravilla adds, “I think it’s something fun because we would redo the videos in order to get the right pose.”

Members of the Varsity and JV boys’ basketball team of Alisal High School also took apart of this challenge. On November 23, 2016, both teams came together after practice for a quick “chemistry session.” Jose Gil, Alisal High School’s Athletic Director and Varsity coach states, “I had seen it  on social media and I just thought our kids can use this right now just to get some team bonding and some chemistry going amongst them off the court.” He says, “I was excited, I got really into it just because I was the one coordinating the entire thing so it was fun and something different that served to get their minds off of basketball and to build chemistry.”

The Mannequin Challenge; what a Jacksonville group from a Florida high school thought was a kill time in class video, turned out to be more than they could have ever imagined. This challenge has spread all over social media, reaching every corner in the world. It has grabbed the attention of many people including many celebrities and bands doing this precise challenge during concerts. No doubt can we say that this challenge spread like fire under a short time period of just a month. We’ve seen from our very own Alisal High School’s classes, students, and school basketball team how this Mannequin Challenge is done. Next thing you’ll see, is our very own staff doing the same, but, what’s better than a “Ready, Set, Freeze” type of video to start off your day?

Below are the links to the videos.