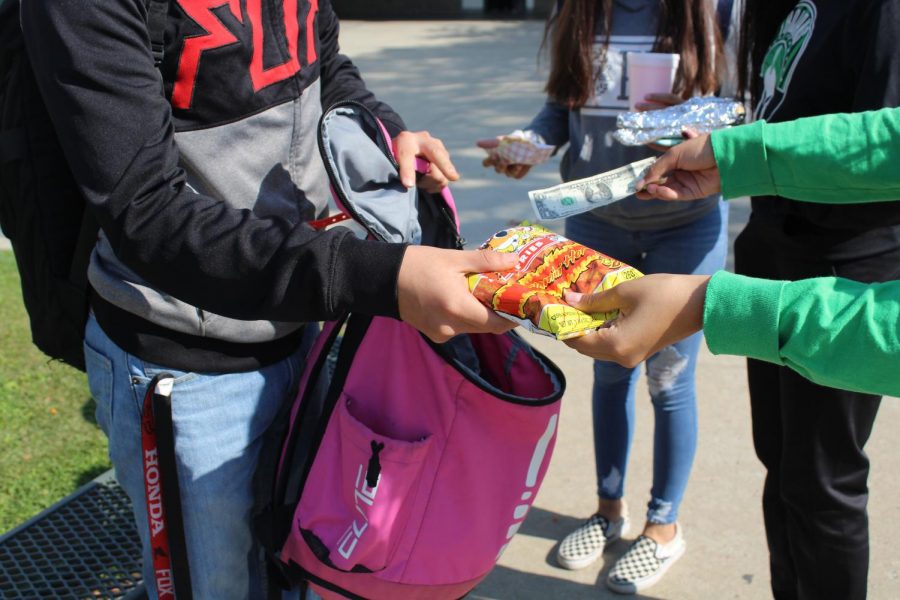 Money, they say it makes the world go round. Nobody knows that better than salespeople because if they don’t sell, they don’t make money. While some products are a hard sell, others, like food products, are a little easier. Many students at Alisal High School sell chips to make money, even though it’s against school rules and state law.

As you walk through the crowded halls, you will see many students carrying duffle bags, and in some of those bags you will find 30-40 bags of chips. The chips are typically sold to their customers for one dollar. These sellers do make good money (Names are given to those who decided to remain anonymous ), Jake stated, “I make about $20 a day and I can make about $100 a week”. Most of them prefer to sell chips rather than working in a job, because they just didn’t have the time to get a job. Some didn’t have the time because they were in sports which didn’t allow them any time to work.

The students who sell want to earn money to buy something for themselves, help their parents out, or save up to pay for college tuition. Jenny stated, “The only reason I do this is to pay for my school expenses and helping my parents pay house bills.” Another student stated, “ I’m just trying to save up to buy a car.”

Some students don’t really understand the consequences of selling chips on school campus. Students selling food on school grounds are violating California law, the nutrition law at schools that doesn’t allow junk foods to be sold. Adding to the conflict, students are selling, without a permit, non-nutritional foods which goes against school policies.The students are at risk of having both their money and their chips being confiscated by school staff. The only time students can sell unhealthy foods are during school fundraisers for sports and clubs.

If students get caught selling chips on school grounds, they will face with “a talk with parents, a warning, or lunch detention,” according to assistant principal Enrique Lopez. Several of the sellers weren’t aware of the consequences., “No, I’m pretty scared about the fact if I do get caught. But it’s all for the money I need to pay for school expenses and I’m willing to take the risk,” said Jenny.

Argenis Jimenez, a junior who is a frequent chip buyer, said, “I usually don’t choose to eat the school food. I frequently purchase chips and I just want to help some of the students who sell chips as well.”

While helping a classmate is a factor, a new trend could end chip sales altogether. Some students are now buying bags of chips that contain marijuana.

This new trend has the attention of assistant principal Enrique Lopez. Lopez stated, “ This is wrong. Students don’t understand how dangerous it is on what they’re doing. They don’t understand that they are liable for the students that they sell to. They can possibly cause harm to students because the students don’t know about the amount of THC found in the chips being sold.” He also added,“We automatically move towards school suspension because we have a zero tolerance policy about that.” A student who sells THC chips said his results were pretty shocking compared to students who sell normal bags chips. ‘Jim’ said,  “I sell to provide to the people and for the money.” He went on to say, “I sell about 2 bags a day, each bag costs about $25, and I make $50 a day, so I also make about $350 a week”.

The amount that THC chip sellers make a week in comparison to regular chip sellers is three times the amount, which may be one reason students are turning to a very illegal solutions to make ends meet. While the profits are significant, the consequences are severe, with the possibility of suspension or expulsion.