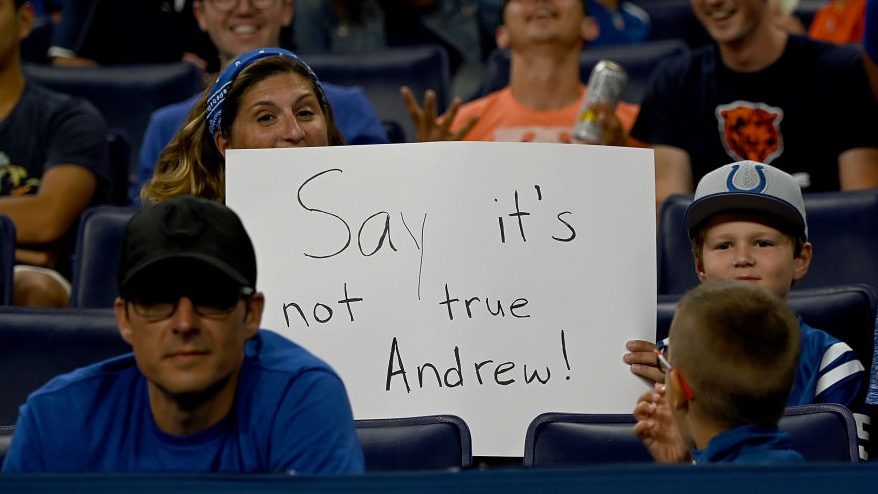 Have you ever been watching a game and a player from your favorite team drops a pass or misses a shot? Do you believe getting mad at them is okay? I mean, they are playing at the best of their abilities. I believe there needs to be a certain point where a fan stops blaming the players because they couldn’t succeed. There have been many incidents where fans attack players based on their decisions by making fun of them along with loved ones and finding ways to mentally disturb them.

Andrew Luck’s retirement is a perfect example of terrible fan behavior. The former 2012 1st overall pick just retired after 7 seasons and at 29 years old. Most quarterbacks retire in their late 30s, especially if they have skills like Andrew Luck. He was an elite quarterback, a good teammate, never had problems with drugs, and a star and good man overall. Nonetheless, on August 24, 2019, he announced his retirement from football. He played all his years with the Indianapolis Colts, but he missed 26 games in 4 seasons. Also being sacked 72 times leading the league in that.

On the day he announced his retirement, both Indianapolis Colts and NFL fans booed his decision. Besides his loyal fan base, were various reactions from the public. For example, Dez Bryant, former Cowboys wide-receiver, said this on Twitter, “Andrew Luck I understand you 100% brotha… take your time… I wish you the best” he also followed up with, “I been speaking on how I feel for a long time…it takes somebody like Andrew Luck for y’all to respect it…” Oakland Raiders Quarterback, Derek Carr, also tweeted, “Wow… always enjoyed playing against him since high school! Wish him the best.” Best of all, NFL wide receiver Torrey- Smith tweeted, “Any athlete in any sport that has had a major injury understands exactly where Andrew Luck is mentally.” I like this tweet because even a high school athlete knows one is the same after injuries since they stay with us and are expensive to treat.

On the day of his retirement, the Indianapolis Colts had a preseason game against the Chicago Bears. The starters only play a few snaps in order for rookies and backups to develop their skills. Andrew Luck, now retired, walks on the field in an Indianapolis Colts long sleeve and is booed. Former backup quarterback Jacoby Brissett said, “It sucked. Especially a guy like that, who has done as much as he has done.” He will now be the starter for the Indianapolis Colts. Green Bay quarterback Aaron Rodgers called the booing “disgusting” and said the fans should have thanked Luck.

Another example of terrible fan behavior is what happened on  July 12, 2019. It was game 5 of the NBA finals when Kevin Durant came back from a calf strain injury. It was the second quarter and with about ten minutes left, Durant was attempting a crossover move over Serge Ibaka when he lost the ball and fell to the floor because he tore his left achilles. So then his teammates helped him stand up. Several Toronto fans started clapping and waving him goodbye because he got injured, which I see as major disrespect. This is major disrespect because you’re celebrating because someone got injured. The majority of Raptor fans quickly realized that they were extremely disrespectful and they started clapping and cheering positively know, Kyle Lowry was the first person that changed the crowds tone.

Several NBA players had something to say about this. Channying Frye on Twitter said “Damn man watching that live hurts my heart! Kd is a warrior for even coming out.” Kevin Durant was pressured to hurry up on his injury because his team needed him. Two NBA players had a reaction of Toronto fans clapping and cheering for Kevin Durant’s injury, Joel Embiid said this on Twitter, “Why are they cheering for his injury? Come on man #Disgusting“ Embiid is confused on why they are celebrating for a man’s downfall.  Also, Tyus Jones said, “Don’t cheer for a player getting injured come on y’all” Jones is giving us advice. A little bit of insight on what these professional athletes think about these terrible actions of fans. Furthermore, Trae Young said this on Twitter “MAJOR RESPECT for KD wanting to rush back and try to help his team win a Championship… Get Back Healthy Bro🙏🏽” Kevin Durant would have not played if the Golden State Warriors were up in the series but they were down 3-1 games in game 5. The Warriors still somehow won the game 106-105 but they lost the series the next game.

When it comes to fan behavior, we need to know the limit of how much a fan can say or do to a professional athlete. Professional athletes sacrifice their bodies and their mental state for our amusement and also we make money off them with bets. There are multiple apps and websites to place bets. Also, fantasy sports apps got created to make money off an athlete’s performance. Athletes are also not allowed to go anywhere without the press taking pictures of them or fans coming up to them asking for a picture or an autograph and they can’t spend time with their families in public. To conclude, fans need to stop thinking about themselves and let athletes live a normal life.