Planning the next move 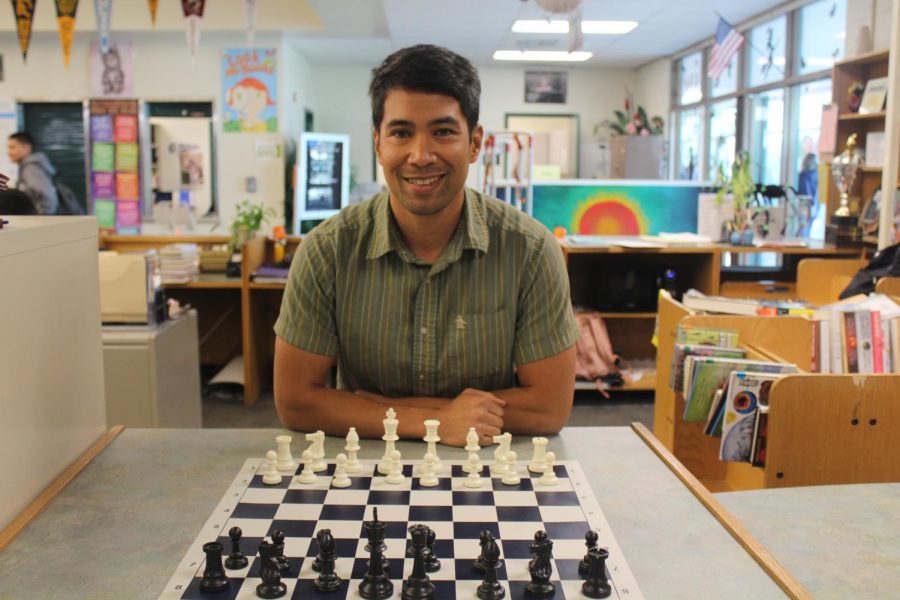 If you have ventured into the library lately, you’ll notice a new face behind the front desk, the new librarian, Chad Francisco. He took over for Joanne Collins, who retired after thirteen years and went to Georgia, a country in the intersection of Europe and Asia for a new beginning. For Francisco, it’s also a new beginning, but he brings a lot of experience.

Francisco was born and raised in Salinas, California. He went to North Salinas High School and graduated in 2002. After graduating high school, he attended Hartnell College from 2002 until the fall of 2005. He attended Hartnell because it was close to home.

He transferred to San Jose State University in the spring of 2006. He decided to go to SJSU because it was also close to home and because his girlfriend at the time went there and he thought it would be great to join her. He majored in Psychology and decided to study abroad at Thammasat University in Thailand from 2007-2009. Francisco got accepted in more places but he chose to attend Thammasat University because it was the one he could afford at that time.

After receiving his Bachelor’s degree in 2009, he went back to school to get his Master’s degree in Library Science at SJSU in the spring of 2010. Meanwhile, he was working in Japan as a paid library intern in 2011 for almost a year at the United Nations University while continuing with his studies. “Graduate school was online and that’s why I was able to work as a librarian in Japan.” He earned his Master’s in May of 2012.

After getting his degree, he started working as a librarian overseas. He decided to travel overseas because he wanted to get the experience. “I didn’t know much about traveling and cultures, I wanted to get personal experience other than reading from books,” he says.

Right after he graduated, he worked full time as a librarian at Nazarbayev University in Kazakhstan. While he was in Kazakhstan he met a woman who is now his wife. He got married in Astana, Kazakhstan in 2014. He has a large family – a wife, two daughters, and three cats. After Kazakhstan, he moved to Saipan in 2014. In Sapian, he worked as a librarian at Northern Marianas College. “The last place I was at was in Saipan, a small island. I was there for almost two years,” he says.

He came back to Salinas because he went through a tragedy when he was in Saipan in 2015. “The typhoon’s name was Soudelor and it completely destroyed my house, that was the main reason why we moved back.” He had to survive months without power while raising his first newborn.

After returning to California in 2015, Francisco worked for the Salinas Public Library. He liked working there because it was fun and had a lot of experience working in the public with different groups of people like children, teenagers, and adults.

He saw that Alisal was in need of a new librarian and that this was his opportunity for a new start. He has been a research, academic, and public librarian before coming here. He decided to come to Alisal because he thought it would be interesting to be in a school library.

His concern when he first came to the school was whether or not he would have support from the administration since he wasn’t sure what kind of funding he would get. “Now I realize they’re fully supportive of the library plans and needs. I realized the admin was really supportive early on and not entirely because of what anyone did for me, but because of the entire atmosphere and how everyone is at Alisal, staff, and admin in general.” When he first came here he was a bit nervous. Eventually, he got comfortable and started to feel more like home. “I feel comfortable, everyone is so friendly.”

In order to smooth the transition, Francisco kept a program started by Mrs. Collins, the Library Guild. Francisco plans to continue with the Library Guild Club and his goal is to not let it die. “ I have no plans of not being part of it. According to the club president, junior Diego Alfaro, the club is about “fundraising to support the Alisal High School Library along with going on field trips, at the end of the year, the club uses some of its money to go to Barnes and Nobles to purchase books for the library.”

Besides maintaining the Library Guild, he has some ideas of his own. “I like to do anything new. When I first got here, I had no idea what the guild was and I thought it would be great to bring in some of my crazy ideas. Hopefully, when I get some more time, we can start on the crazy ideas.”

One of his not so crazy ideas involves a classic game. If you take a look at the library, he has a station where students play chess. He really enjoys chess, therefore, he plans to make a chess club and he and English teacher, Joshua Fontanilla, planned a chess tournament for the end of November. “We want to lead up the chess club. Once we get a chess club we want to play other schools in the district.” Francisco said.

But it’s not all fun and games for Francisco. He wants to educate students to use the resources independently, making things easier to find and use. He is most excited about making all his projects happen such as modernizing the library, ordering new furniture and having a new facelift. “I want to remodel the library to make it more welcoming for different groups of people who want to work, hang out, or students that want to play,” he says. He aims to reassess the library’s collection.  We are expected to see the library transform into a more acceptable place throughout the year for everyone who needs a space to spend time.

What he enjoys most about his job is interacting with everybody. He believes the best thing about being a librarian is being surrounded by books and students. Of course, he has read tons of books but he has a specific novel that is significant to him. Francisco’s favorite graphic novel is Buddy Does Seattle. This novel has legendary stories about Seattle’s early 1990’s culture. He also has a book that is super significant to him. “There’s a book by Frantz Fanon, it’s called The Wretched of the Earth. It’s a good book. I’ll leave it up to the people to find out why it’s significant.”