How young is too young to use social media or have an electronic device? 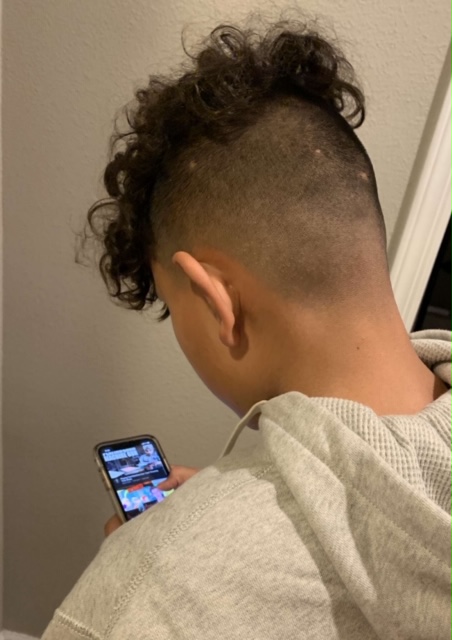 My 14 year old cousin using his iPhone 11 scrolling through YouTube searching for a video to watch.

Prior to me getting a phone freshman year, the way I entertained myself would be by going out with my friends and playing soccer or jumping on my friend’s trampoline. I honestly felt very good because it would relieve me of any stress coming from school. I’m very grateful that I didn’t have a device that distracted me from the outside world and I enjoyed my childhood because I got to go outside and play with other kids and be friends with them, unlike today’s kids who already have a device at such young ages and can’t stand ten minutes without them.

Today, it seems like almost all children have some kind of electronic device. My two-year-old nephew, for example, already has a tablet and he’s always playing either Fortnite or Call of Duty. I see it as a bad thing because if they take it away for two minutes he starts crying and gives his parents attitude.

It bothers me that my parents got my little brother who’s 14 has a mobile device because ever since he has been on his phone a lot more he has shown impulsivity. When he is asked to go and eat he always says, “I’ll go in a bit” but he really takes like 10 minutes to go and eat. When my dad goes and gets him he’s always on his phone and gives bad attitude, even when we’re eating he tries to be on his phone, but my mother doesn’t let him because it’s disrespectful. He’s usually just texting, watching Youtube or playing mobile games. He gets very combative when he is texting and someone tells him to do something like take out the trash and he does respond but in a loud, mean way. My parents tell him to not respond in a disrespectful way and take his phone away and so now my brother isn’t disrespectful.

There was a situation where a twelve-year-old boy was caught cursing and saying inappropriate things to a Twitch streamer by the name of Pokimane which happened August 21, 2018. Pokimane is a streamer who streams Fortnite and makes a living off of it. The twelve-year-old left Pokimane and the audience very disgusted because of his comments asking her “Are you down to sixty-nine?” which is a sexual position and also yelled out “Allah Akbar”, an Islamic phrase that means “God is great”, which is sometimes shouted by terrorists. Horrified by a twelve-year-old making these comments, viewers quickly took action and reported the young man, who then went on to make an apology video. Bad language is the least dangerous thing young children have to deal with, but there are so many more worse things they may encounter.

According to Common Sense Media, “When you hand your children cell phones, you’re giving them powerful communication and media-production tools. They can create text, images, and videos that can be widely distributed and uploaded to websites instantly. Parents really need to consider whether their kids are ready to use their phones responsibly and respectfully.” To me, this is important because you truly never know how a child or any person can act online or what they can see on the internet. Giving them this kind of access to the internet can be a good thing, but also it can be a bad thing because of how mysterious and unpredictable the internet is.

From my perspective, children should be getting a phone/tablet with internet access at the age of 16, not before. They should only use the phone or tablet for school purposes and a little entertainment under the supervisor of their parent(s). Parents can monitor their children by using an app that allows them to limit the time the child uses the mobile device and also advises the parent if the child is on a risky website or watching something inappropriate.