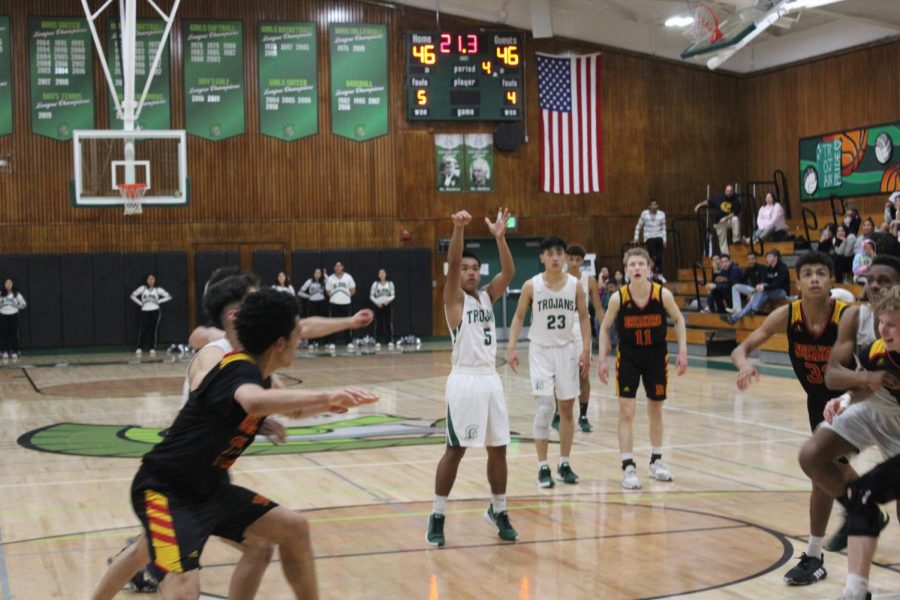 Junior guard Jopel Gaveria, making two free-throws to bring up the score to 47-46 with 21.3 seconds left. Trojans play tough defense on the other end to win the game .

The 2018-2019 season came to a shocking end for the boys’ varsity basketball team. After going 6-3 in league, they earned the #4 seed but they were upset by the fifth-seeded Salinas High Cowboys 67-56 in the first round of the playoffs, ending their season at 18-6 overall.

It was all the more shocking since they had dominated Salinas in league play. “It was heartbreaking for all of our hard work to only lead to a loss to Salinas High,” said senior center Richard Solis III. Anthony Martinez, guard, quickly got his head in the game in the little time he was given. “With thirteen seconds left in the fourth quarter, my name was called and I was nervous but with my first shot at eight seconds, I made a three-point shot,” said Martinez. The team did not give up and was still fighting, Martinez was put in for his three-point shooting. “This game made me work harder and reflect upon what we as a team can improve on. All we can do from here on out is focus on the future of the team,” said Shawn Vuong. This year, Solis and Vuong are leading the team because of their experience and leadership skills.

The varsity team is young, with only three returners – seniors Daniel Martinez, Shawn Vuong, and Richard Solis lll. “It feels good to be a returner because I get to come back with the experience of being on varsity and to compete at a high level,” said Vuong.

All three boys played together all through freshman year, one year of junior varsity (JV), and two years of varsity. There is one more player that had varsity experience, at the end of the season, sophomore Anthony Martinez. Martinez got moved up from JV after Coach Gil was impressed with Martinez’s performance in a win against Salinas High. “He has the nicest release I have ever seen and his three-point shot is by far the smoothest by underclassmen,” said Gil. He played a total of six games and one of them was a playoff game. During his first home game, Martinez had fourteen points off the bench against Monte Vista Christian. “This little experience helped me out, the game was fast when I started, but this year the speed is normal, which really helps,” said Martinez.

The rest of the players are first-year varsity. Eight players that played JV and two players that did not attend Alisal last year. Junior Alex Maravillo, got demoted to JV last year after a few games but is back on varsity this year. “Being on varsity is very exciting, but it also pushes me to compete at my highest level of competition,” says Maravillo. The team has just the right amount of experience, leaders, and youth.

The strengths of this team are unique. “We are a very hard team to prepare for because we are so interchangeable,” said Gil. This team will make you really study film and try to figure out how to stop them since they are an all-around team. “We are interchangeable at every position, also our effort is out of this world, no matter what team we play, you best believe we are going to give it all we got and leave everything on the court for the fans,” said Maravillo. This team does not give up no matter what. Some players think otherwise about their strengths. “Our team strengths are pushing the ball and defense,” said junior forward Ivan Villicana. “Our team strengths are that we have good shooters,” said Julio Rodriguez.  “One of our strengths is our speed,” said Elijah Wells.

The team had a solid preseason, going 7-5, but league has proven to be a little more challenging. The team is 2-4 through the first half of league with close losses from Salinas High, Carmel, Palma, and Monterey. “I feel we’re doing decent overall as a team,” says Villicana.

While chances are slim for a league title, the team has shifted their goal. “My goal is to go to the playoffs,” said Rodriguez. It’s Rodriguez’s first year playing varsity, and his first year playing at Alisal. Martinez said, “I feel like we have the potential to make it far with all the talent on the team.”

This team will need to step it up and continue to improve if they want a trip to the playoffs. It is up to Gil to coach up all this raw talent and get them to the playoffs. According to Gil, their record needs to be over .500 in preseason, regular season or overall, in order to qualify for an at-large bid. Since they were over .500 in preseason, they qualify but it’s not a lock to go. The seeding will depend on how many games they win. “The goal has not changed. We have been competing and if we do our job everything will fall into place,” said Gil.