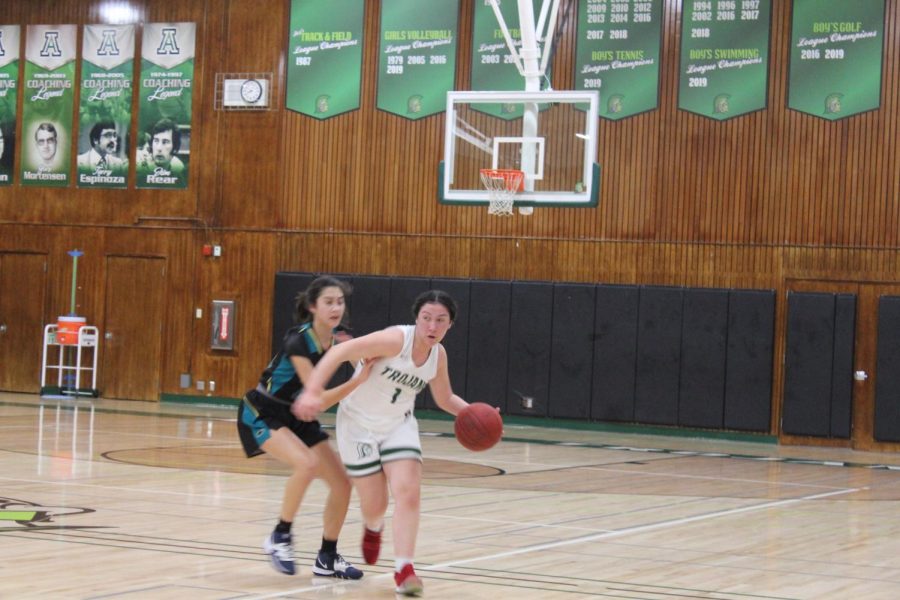 Briana Mejia drives to the basket against Christopher in the Trojans' 54-47 victory on 1/28/2020. The victory put the team firmly in first place at 5-0.

The girls’ varsity basketball team had a solid season last year, going 6-4 in league, finishing 15-10, and qualifying for the playoffs. This year the Lady Trojans have come back stronger and are looking better as a unit according to their coach.

Despite the loss of some senior leadership, the underclassmen have stepped up to fill in the gap. With returners Brianna Alvarado, Briana Mejia, Katarina Cabrera, Mikaela Arista, and Guadalupe Perez working together, the plan is to win league and go further in the playoffs, “I would see making playoffs this year especially important for my team and I. We’ve put many hours into training and learning our plays to better ourselves as players.” said Cabrera.  Coach Humberto Arista has a lot of faith in his team, “I know my girls will step up to the challenge and we believe in defending our house.” He strongly believes his team has an opportunity to achieve both goals.

Joining this year’s squad are sophomore guards Karizma Ruiz and Jacqueline Rangel; senior guard, Jacqueline Torres, and senior forward Michelle Torres. All of them are ready to step up to the challenge and be assets to the team. “I feel accomplished playing on the varsity basketball team because I contribute to my team by attending all practices and games,”  said senior forward Michelle Torres. Returning junior Mikaela Arista believes familiarity with each other helps, “We’ve been playing together for so long, I think we have really good chemistry and we move the ball really well when we all play together.”

Coach Arista believes that his team’s strengths have helped them this year. “The girls have good basketball IQ, they know the court and when they do they’re smooth in numbers. However, with the strengths they possess, there is still room for improvement. They need to maintain balance during big games and maintain better communication during heated moments.”

The team has done well so far, going 10-4 in the preseason. Their strong start has carried over to league play where they started 5-0. Mikaela Arista said, “We’re doing pretty good so far, we’re undefeated so hopefully we can keep up the tempo and finish off the season strong.” However, she believes their biggest competition has to be Christopher because both teams match up well.

Arista knew what she was talking about. In a showdown of undefeated teams on January 28 to close out the first half of league, Alisal prevailed 54-47 to take sole possession of 1st place. They followed up with a victory over rival Alvarez on 1/31, to improve to 6-0. With four games to play, the Trojans remain in the driver’s seat for the league title.