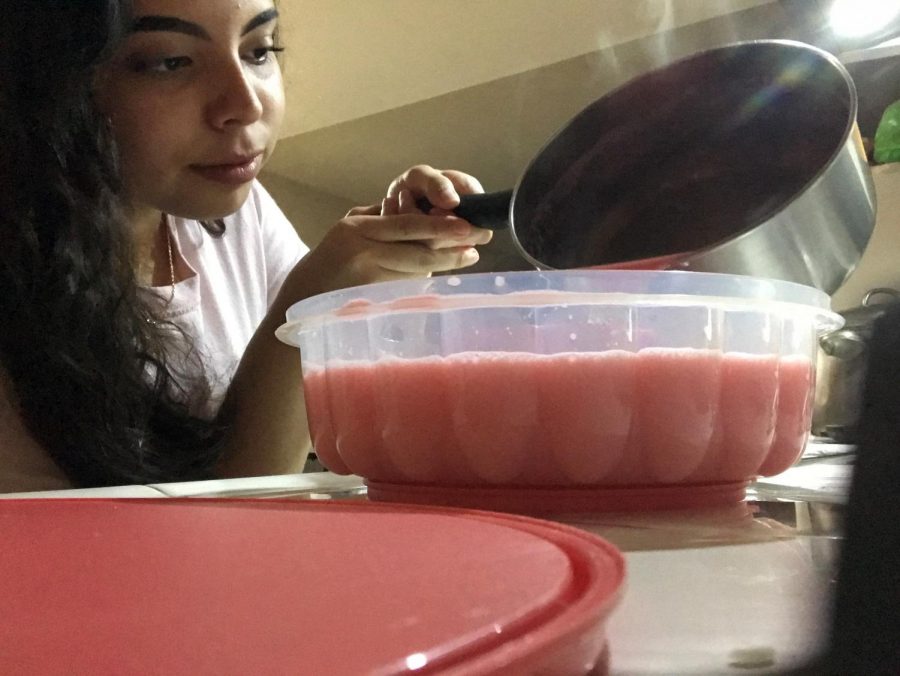 Jennifer pouring strawberry gelatin into a mold. "I enjoyed learning how to cook because it gave me knowledge about the ingredients and food and I know it will be useful for the future."

When students found out they weren’t coming back to school for a few weeks, some were happy, some were sad, and some were worried.

Many viewed this shutdown as vacation since this has never happened before and school was only going to be out for two weeks. We now had time to do the fun stuff we couldn’t really do due to school. I had more time to be on social media and make new friends since staying home was getting boring. I started doing tik toks with my sister for the first time and it took the boredom away for a while. I’ve always done my makeup to take my boredness away so I started doing bracelets and anklets made out of thread with my sister. And lastly, I started painting the basics.

However, that changed when my mom had an operation and couldn’t do anything for days. It gave me a lot of new responsibilities – cooking, cleaning, and organizing – that I had to do on the daily.

At first, I was fine with the responsibilities, I mean I was used to doing some of it even before she had her operation. But instead of just doing laundry,  I now had to do what she does on the daily which is cleaning, cooking, and putting everything back into place after I’m done cooking and cleaning.

It was a little overwhelming at first when I had to do so much in a day and didn’t get time for myself. I had experience with cooking already, so the cooking part wasn’t really a problem. Of course, my mom had to eat healthy food for a week, so I had to do my research about some recipes since she isn’t used to eating so “healthy” and doesn’t have many recipes.

Eventually, it got easier. I learned to cook new meals by looking at some recipes on Youtube or having my mom tell me how to do it. Most of the time, I had all the ingredients, but when I didn’t I would either go to the store and buy them or order them to deliver. I learned how to make green Aguachiles, well-seasoned asparagus, white rice with veggies, avocado toast, and lastly (my favorite recently) fruit bowls. I also learned to prepare some other less unhealthy food. I improved on doing some meals that I had already prepared in the past like, rice, fluffier eggs, beans, and pancakes. My sister helped me get the ingredients together and clean up since she can’t go near the stove. I learned to make time for myself by having certain hours to prepare the food and do some chores.

I learned to appreciate my mom more after basically doing everything she does in a day for approximately two weeks. It was getting overwhelming at the end, especially since multitasking can make you forget about some things. For example, while I would be cutting some vegetables, I would forget I had the stove on.

However, I learned a lot from this experience and ever since my mom got back to her routine, I kept on helping her some days with the cooking since I’m not going to school. I continued cleaning and doing laundry, since I always do them. With some help, cooking can be fun and even faster, leaving me more time for myself. I feel like I got closer to my mom in some way because I can sort of relate to how she feels now. I now appreciate my mom even more than I did before because I feel like I took her for granted since she basically does this on the daily and although I can see the stress in her eyes, she still manages to do it. These past weeks have helped me manage my time wisely and do chores at a much faster pace, and the responsibilities have helped me in many aspects by preparing me for the future when I start being independent.