A Season of Struggles 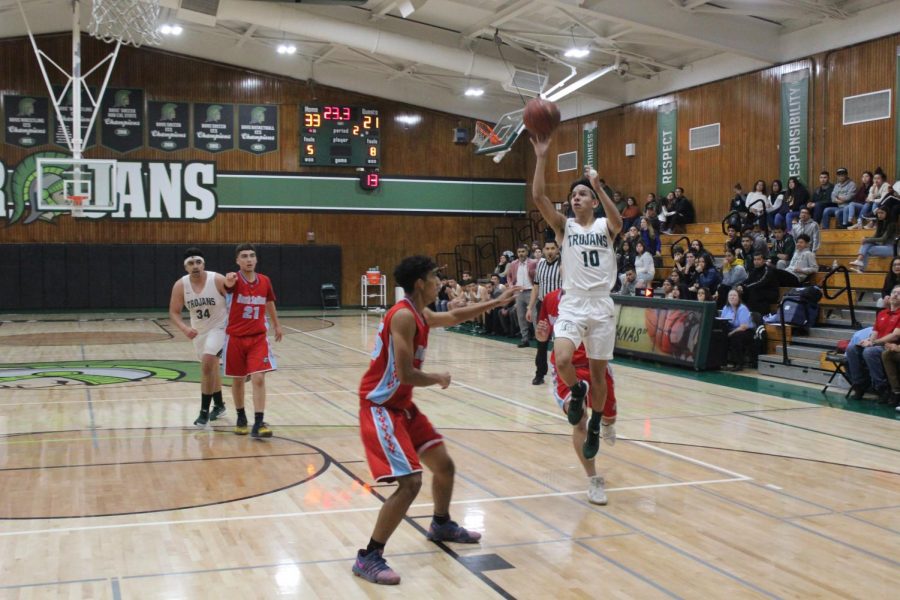 Senior Nicholas Enriquez makes a floater against North High. Alisal won the game 73-42. “It felt good to be back on the floor after a year and to be playing with my brothers,” said Enriquez.

Last year, the varsity finished 18-6, second in league, and made the playoffs. But after getting hit hard by graduation, this year was much different.

The varsity team was young, with only three returners – seniors Daniel Martinez, Shawn Vuong, and Richard Solis lll. “It feels good to be a returner because I get to come back with the experience of being on Varsity and to compete at a high level,” said Vuong. The rest of the players were first-year varsity. Six players played JV and two players did not attend Alisal last year.

The Trojans finished preseason with a record of 7-5. “It was a good experience before the regular season after being gone for a year,” says Nicholas Enriquez. Enriqu

ez took a year off basketball and joined back for his senior year. “It was a good experience for us to build chemistry as a team because that was our first time for many of us playing as a team,” said Maravillo.  “I was happy with the result of the preseason, but there were two games we should have won,” says Head Coach Jose Gil.

The team struggled in league, going 3-9. A pivotal game was when Alisal played Pacific Grove the first time. It was their fifth league game but their first victory in league and the final score was 47-46. “I gave it my all every time I was in,” says Jopel Gaveria. Another important game was Alisal’s first game against Alvarez, right after the Pacific Grove game. The 56-30 win kept them on track for the playoffs.

Despite the 3-9 league record, they made the playoffs, but were unranked and had to play on the road. Playing the 11th seed in Division 1, Milpitas, the Trojans lost 65-55. “It was a tough game to swallow. We were up five with four minutes to go in the fourth and we lost, but I can proudly say every single one of us on the team gave it all we got,” said Maravillo. “I’m happy, we got better as the season went on,“ said Gil.