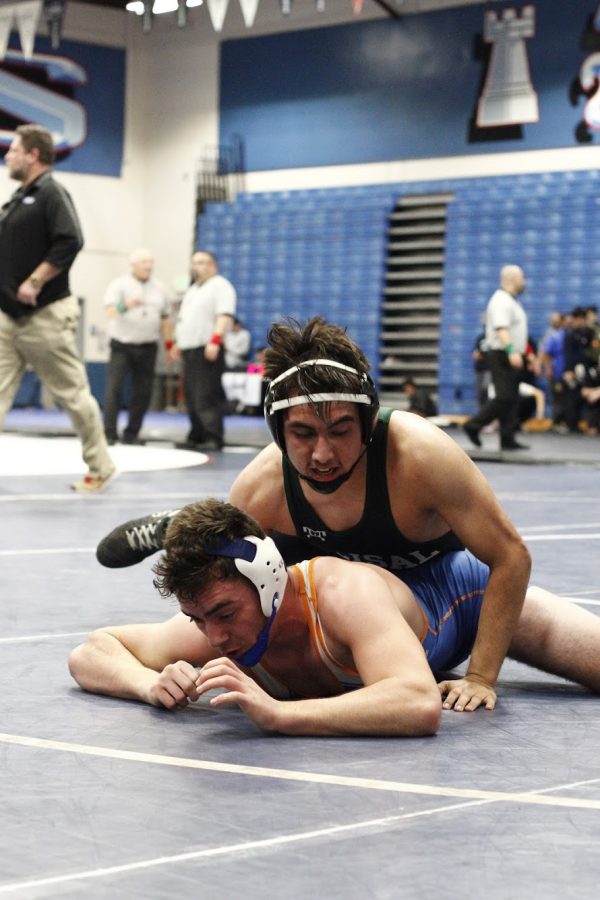 Senior Brandon Jacuinde gets his 100th and 101st win in a match against North Salinas. "It was a really special moment because all my friends and family were there. It made me happy thinking about my first high school match and how much I've improved since then," said Jacuinde.

It’s been said you learn more through adversity than through success, and that was true for the boys’ wrestling team last year, thanks to a shaky senior class and a league format that required a division and a league final before CCS.

This year, the team had to deal with several changes. Coach JJ Garcia was now teaching at Salinas High, the team was now in the Mission Division of the PCAL, the “B” league, rather than the Gabilan, which is the top division, and league matches would be a factor in deciding the league champion, but there would only be a league final prior to CCS.

While moving down was not ideal, Garcia was confident his squad would win league. The senior wrestlers – Brandon Jacuinde, Justice Jones, David Ramirez, Andrew Blains, Antonio Chaves, Pablo Trujillo, Ruben Ramirez, Alexis Mendez, Oscar Rodriguez – were the leaders of the group, according to Garcia, doing their best to improve their team. “My top seniors were Justice Jones and Brandon Jacuinde,” he said.

Jacuinde (with a record of 22-9) was a tough competitor, he only lost five matches from their section and four from CCS. He hit his 100th and 101 wins during a tri-meet against North Salinas.

The team dominated league, going 6-0. They went into the league finals assured of finishing no worse than second. However, his team wasn’t as focused as he would have liked early on. “In the first round David Ramirez won by a pin, but the other wrestlers weren’t paying attention,” said Garcia. “I had an emergency meeting and told them ‘People are here to beat us. Pay attention. Don’t let this moment slip away. Follow each other’s matches. Every match counts. Set the tone.’”

After getting the boys locked in, they dominated and won the finals handily, winning the league title for the first time in 25 years and proving Garcia a prophet. “Every kid rose to the occasion. I felt like I’d been there before, but I’d never been there before,” he said, “I didn’t feel any different than five minutes before (they won) because they kids were always champions to me.”

By virtue of their victory, they had 10 qualifiers and 2 alternates for CCS. Jacuinde was ranked 6th in 160s. But for as much fun as they had at league, CCS was heartbreak. Garcia said it was a misstep here, running out of time there, every defeat snowballed and they couldn’t get any momentum. Jacuinde, juniors Adrian Gomez and Ivan Ramos, and freshman Harry Ordiana made it to Day 2, but it was just another day in “Heartbreak City.”

After Gomez, Ordiana, and Ramos lost, Jacuinde was the last man standing. “Brandon makes it to the quarter finals against the #3 seed. He was up 10-7 with 16 seconds left. Brandon lets him go, guy goes for desperation and guy takes him down for 4 points with 2 seconds left. He lost 11-10,” said Garcia. Jacuinde lost the next match 6-5, and the tournament was over. “The kids were down, and I had to console a bunch of them. I feel like I set them up for heartbreak,” said Garcia.

Despite the disappointment at CCS, Garcia was glad to have been there for the seniors’ journey. Garcia said, “They’re a family. They’ve been a family for the past 6 years. They’re close, they work hard. I can appreciate their friendship and willingness to help each other and care for each other.” Jacuinde echoed those sentiments, “My favorite part about wrestling is the brotherhood.”