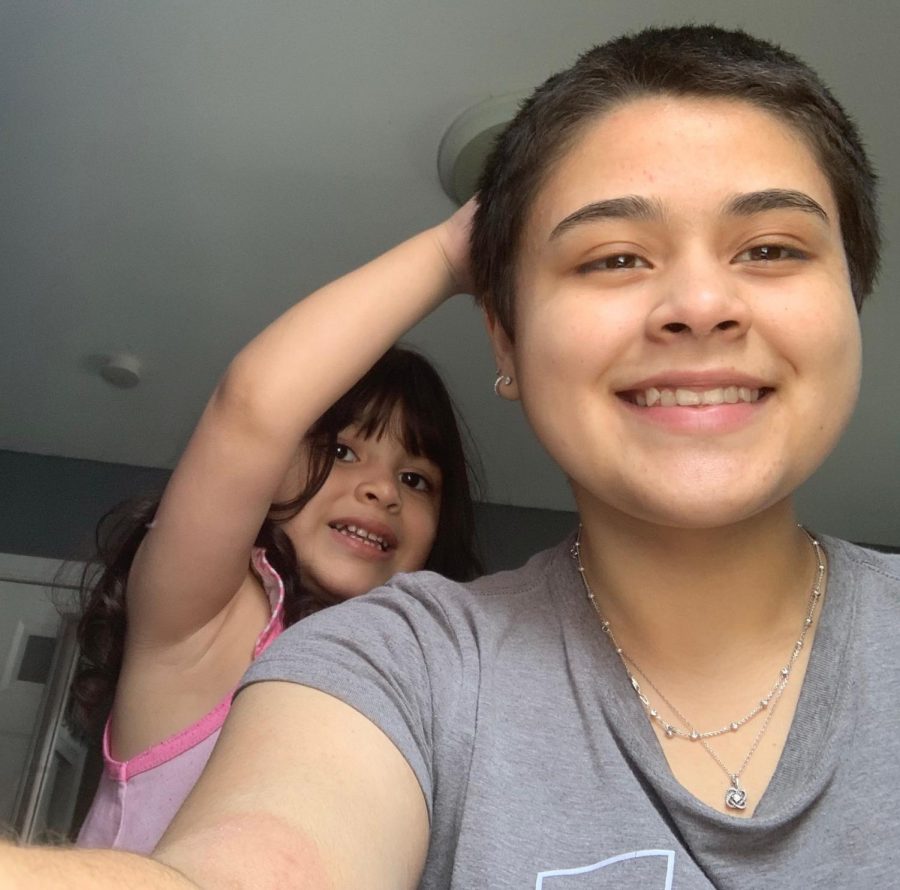 After I cut my hair, one of my biggest fans was my little sister. Every morning she wakes up and comes over to pet my hair and tells me, “Ooo I like your hair.”

Ever wondered what it would be like to completely shave your head? I did. It took two years and a world pandemic to finally have the courage to go through this idea, and although there were a few discouraging moments, it was all worth it.

Once you commit to doing it,  all kinds of worries and fears start running through a person’s mind; they certainly ran through mine. This isn’t something that can be easily decided since much of a woman’s identity is tied to her hair. Typical stereotypes ran through my mind – Would I look like a boy? Would I lower my femininity? Would I have to dress “girlier”?

I didn’t understand why these ideas concerned me so much, until I realized the amount of pressure there was for a woman to look a certain way. Beauty standards for women are made for women, and others, to believe that in order to be seen as an “ideal” woman you have to follow what are typically known as feminine ideals. These feminine ideals are focused on the importance of the physical attractiveness of a woman – her body, style, hair, skin – are all qualities that every woman must strive for.

Deciding to cut all my hair meant challenging these ideas. But I feared the outcome because I knew how much criticism there is in this world, especially on women and their appearance. Changing my appearance would make me a target, both positively and negatively; however, going through these experiences made me the person I am today.

Prior to shaving my head, I already had short hair. I’ve had a pixie cut for two years because I believed it would be the most feminine haircut. I had this idea that if I had cut my hair any other way than I would be seen more masculine. I was already afraid of what people would say therefore, if this feminine haircut would lower my chances of being seen as a target for negative criticism; then I was willing to get this style of haircut for my own reassurance.

Surely what I thought was just a short pixie haircut others saw it as an opportunity to voice their opinions. To my surprise, I received compliments, rather than criticism, from almost everyone who looked my way. People who’ve never spoken to me before would stop me in the hallways and ask me why I did it. And my response would be “why not”. They praised me for my bravery and confidence. This was not only a haircut it was a gateway into finally having the confidence that I seeked in myself for so many years.

With that praise came the other side too, the side that I feared most. I was immediately placed into a box where stereotypes only existed. Sexuality was the main topic; it was questioned by so many people after I had cut my hair, and to a lot of people it was my way of “coming out”. Yes, they were mistaken however, I couldn’t blame them for what they were told by society. This was the kind of reaction I expected to receive however, the criticism that I feared no longer existed.

I never imagined that by changing something so simple could open up my whole perspective on how beauty is perceived and how women can be treated. My initial fears and questions no longer haunted me. I didn’t care if I looked like a boy, I didn’t care if I lowered my femininity, and I for sure didn’t care whether I had to dress girlier or not because it would be my own decision. For the first time in my life I stopped listening to these beauty standards that were placed upon me. Since I had built this confidence in myself I decided to shave off all my hair and get the buzz cut that I always wanted.

Defying all these rules of beauty made my decision even more important to me. During this time in quarantine shaving my head made it so much easier because I knew that no one would look my way and judge me for my decision.

When I had shaved my head, I had no regrets and I could argue that this has been the best decision that I have ever made. Seeing all your hair fall down onto the ground is the most liberating experience. Suddenly, this invisible shield was broken and all I could see was myself. This was the person I wanted to show everyone not because of the way I looked but because of the way I finally felt. Everyone who has seen my new buzz recognized how happy and confident it made me feel and that is exactly what I wanted to show because seeing the way I felt made them happy as well.

Part of growing up is becoming comfortable with the fact that you are different and unique in your own way these outmoded stereotypes shouldn’t come between the person you want to be and how you want to be seen. From now on this is how I want everyone to see me and this is how I plan to stay. Who knows what other haircuts I’ll be doing in the future what I do know is that stereotypes like these need to be broken and erased and I intend on breaking them, so next time you think about wanting to shave your head I highly encourage you to just do it. Not only can we defy hair stereotypes (or not) but we can defy all beauty standards that have been placed on women, the only way a woman can is by learning to accept themselves and try things that they want to do not what others tell them to. You are the only person who should set standards on yourself whether that is following beauty standards or completely defying them; whatever it is it should be your own decision and it should be the thing that best suits the person you want to be.