Changing the Body and the Mind 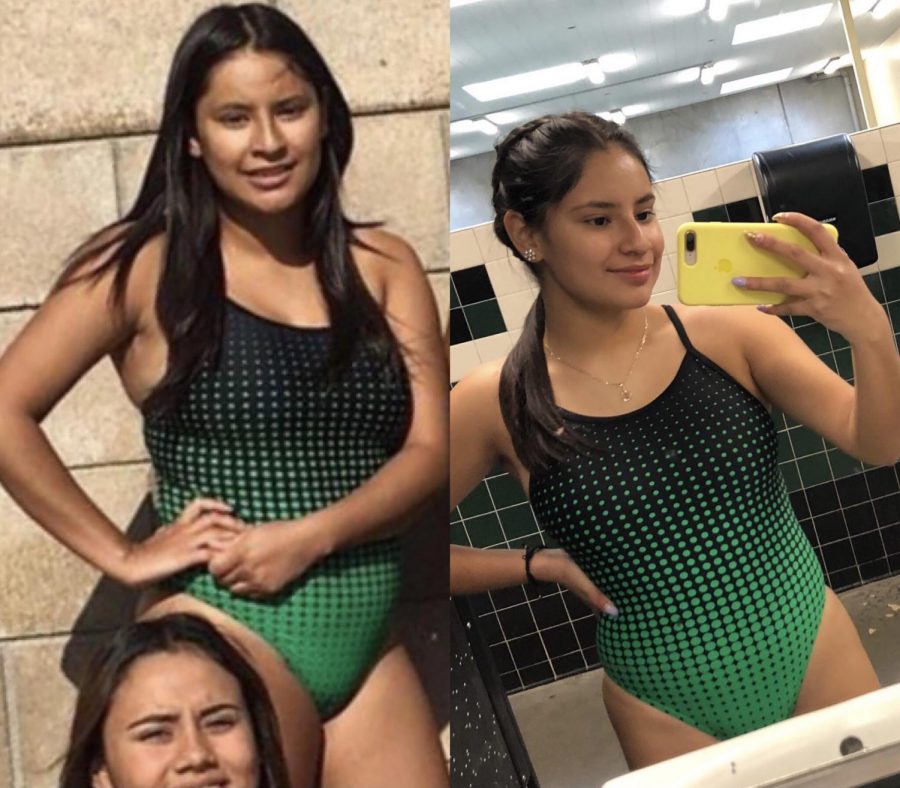 Senior Adriana Flores uses this time to reflect and change. She took up the challenge for a better change. “I like the way I feel and I like how I look in the mirror, I can say now that I love myself even more.”

It all starts with how people feel insecure in their skin and are other factors that add up to it. On the negative aspect there’s teenagers who receive negative feedback from parents,siblings, or a relative. “ Eww, look at yourself.” “ You should lose some weight.”These are some types of comments people receive which play with their minds. Some people affect them more than others which for such reasons he/she stops eating and tries to do anything that would make them feel better.

Body image, the perception that a person has of their physical self. It can be positive, negative, or both, and is influenced by individual and environmental factors.

Because of the society we live in, the ideal body type is considered to be “skinny” or at least “fit”. What others don’t understand is everyone comes in different shapes and forms. Some can be weighing 135 pounds as athletes which typically have a muscular body, but as a normal person not being athletic can either we look skinny or what some consider being “overweight.”

Going on quarantine was a useful time to reflect and change. Such was the experience for Adriana Flores currently a senior at Alisal High School. She wanted to be mentally and physically stable. The number one goal was to lose weight for good health and to reduce the risk of diseases. Adriana states, “So far it has taken so much dedication and patience, I have had a lot of opportunities to give up but I always try to do my best to eat healthy and when ever I cheat, I always come back as if it was the first day.”There are always going to be temptations to eating ‘‘unhealthy foods’’ but she has kept on going. She has achieved her goals by learning to keep a healthy diet. It consists of having supplements which she takes in shakes for breakfast and dinner, mostly solid foods, and another thing that has helped her a lot is working out. Some of her workouts included going on 1-2 mile runs, doing a lot of cardio, and using weights. Also, going on walks everyday has helped her and other activities like dancing. Adriana managed to lose 15 pounds. She now feels comfortable with herself as she states,” I like the way I feel and I like how I look in the mirror, I can say now that I love myself even more.”

Senior Luis Carrada also decided to take up the challenge to make some changes during quarantine. He found himself in a position where he knew he had a lot of spare time and had no excuses for being overweight. The goal he proposed to himself was to lose weight. “The process was honestly hard in the beginning especially since I changed lifestyle so fast, but I eventually adapted to pushing myself everyday to work harder on my body.”Physically how he looks, he had a drastic change .He now tries to workout out everyday. Indeed, what helped him the most was the times he spent with friends playing basketball or football.Cardio workouts like running, sprinting, burpees, and push ups helped him alot. He tries to eat cleaner but he has times where he consumes foods that are not that healthy. It was exhausting as he repeated the same process over and over again. He says that he felt like giving up almost everyday especially in the first week of quarantine where all he wanted to do was stay in bed and take advantage of being home. Although he had a lot of obstacles he faced like being home all day and putting up excuses, he managed to get through them. He won a battle with obesity going from 250 pounds to 175 pounds. “It changed my mentality from using school and other school related activities as an excuse to having bad habits.”

Concern over a family trait moved Martin Carrillo to make a change. Carrillo physically changed because diabetes runs in his family. “I am at a high risk, so I decided that I wanted to lose a bit of weight.” In order to achieve that, he started to start eating healthy. He said that he would cut out unhealthy foods like junk food,  although he still eats them occasionally. “It all depends on how healthy the diet is. You can be eating healthy foods and there will be changes in your body, he said. “Another reason was because I kind of disliked how I felt physically and mentally.”  He said physical changes aren’t just about changing your physical body, it is also about changing your mentality about yourself, about how you feel about yourself, about everything in general because mental health actually has a very big part in how you change physically as well,  The society we live in, skinny is ideal so there is a slight pressure in order to set the standard and he wanted to feel happier when looking in the mirror. Before his transformation, he was a very negative person and struggled with low confidence. He is still trying to improve his mental and physical status, but he is happy the way he is.  “I don’t feel like I changed. I might have changed how I physically look, but you will always be the same person no matter your shape or size.”

In the end, the journey to change is difficult for everyone.  While it may start with your physical appearance, it is about the person you are inside. It’s important to be happy only with yourself regarding what anybody else thinks, and these three discovered that.