Sports in the Pandemic 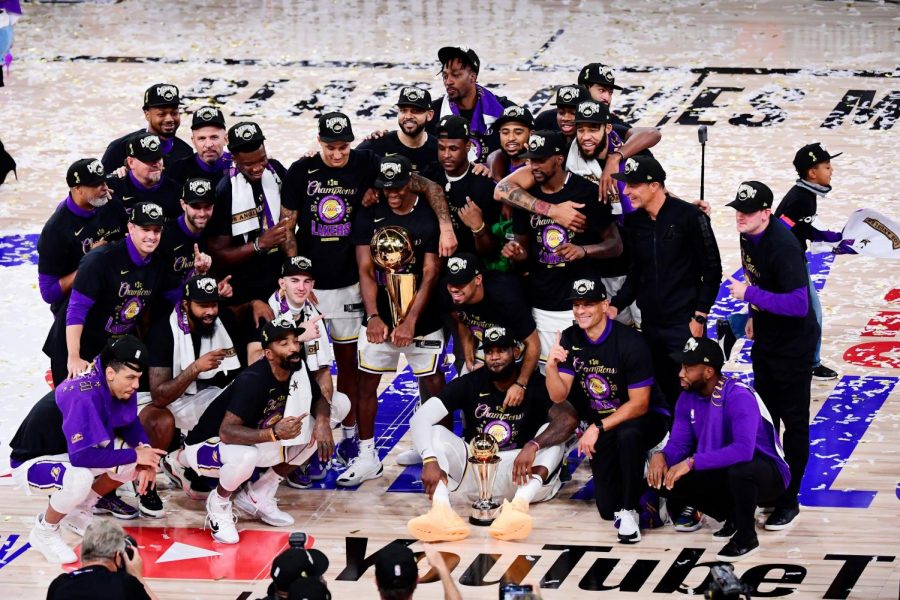 The Los Angeles Lakers won their 16th championship over the Miami Heat, 4-2. All games were played in the “Bubble” in Orlando, FL, and was COVID-19 free for the duration of play.

This has been a topsy-turvy year for sports, thanks to COVID-19. Baseball and football are being played in what would be considered their “normal” times, but basketball and hockey, which would usually be starting, have just recently ended.

After the initial shutdowns of the NBA, MLB, and NHL, each league was challenged with a way to finish their season.

The NBA was the first League to step up by saying they would continue playing in arenas without fans, by playing in what we now know as the Bubble in Orlando, Florida.

MLB adjusted by only making the season a 60 game regular season, kept teams within geographical regions, and had an expanded playoff format. While the league dealt with some outbreaks, the regular season finished on time with no serious stoppage of play.

In the NHL, the top 12 teams in each conference (by points percentage) competed in a modified and expanded Stanley Cup playoffs, which the NHL planned to hold in two centralized “hub cities”, Toronto’s Scotiabank Arena and Edmonton’s Rogers Place, with no spectators and only essential staff present.

The NFL has not incorporated anything new other than not having any fans and still continue to travel privately. Although the league is having to shuffle the schedule after the New England Patriots had a COVID-19 outbreak during the week of October 5th.

Although it seems sports made a big splash when they came back, they are not what everyone is talking about on the scene.

Playing without fans is a major change. Most pro athletes want and need the sound of the crowds chanting to provide momentum and execute the task at hand. Although all the stadiums are using recorded fan noise, in some cases the fake fan noise can actually be a distraction instead of a contribution.

“If that’s how loud it’s going to be, it’s going to be tough for everybody…regular games normally have ebbs and flows, but with the fake crowd noise it doesn’t ebb and flow” said Tom Brady the Quarterback for the Tampa Bay Buccaneers.

It can interfere with the Athlete’s mental game and their performance on the court. All leagues have incorporated automated recordings of crowds chanting or cheering louder for when the team scores, but it hasn’t really taken away from the fact that they are performing for no one.

“This felt more like a high school scrimmage, and your parents come, but no other fans” said Jasen McCourty of the New England Patriots.

Shaquille O’Neal added, “I would absolutely play horrible with no fans. Oh, my God. I would be the worst center in NBA history because I need to feed off the energy of the crowd, I need to get my adrenaline boosted.”

Although both the fans and players would prefer the fans were at the games, the players’ performances haven’t lacked for energy or drama.

A question that has been circulating throughout the sports world asked Adam Himmelsbach of The Boston Globe was, “Will playing without fans become a regular thing to see in the future?”

In an informal survey of 678 people, both students and faculty members at Alisal had mixed reviews.

“I hope not” was commonly found throughout the survey, “Yes, because the sport revolves around the health of the players”, and finally “No simply because these arenas’ sole purpose is to have fans in them.”

Their physical well being is just a part of what the players will have to face, not to mention their mental health.

“I underestimated mental health, honestly. I had anxiety, a little bit of depression. Just being locked in here, I just wasn’t there. I checked out” said Paul George after spending under a month in the Bubble.

“This is going to be the toughest Championship you could ever win….it’s going to be mental. You’ve got to push through this,” said Giannis Antetokounmpo even before arriving at the Bubble.

Off the court there have been a number of distractions that have led to these protests going on in the Bubble and in the U.S.

On August 27, over half of the scheduled games to be played in the NBA were put on pause after all the players had come together to boycott them. They had received the news of the murder of Jacob Blake.

Prior to this date, players from the NBA, NHL, and MLB showed their respect for the Black Lives Matter movement. Aaron Judge and Gerrit Cole of the New York Yankees for example wore two patches across their left arm which read, “United for Change” and “Black Lives Matter”.

LeBron James also honored the BLM supporters by saying that not only is this a movement but a “Lifestyle”. In late August, James also tweeted the following, “Change doesn’t happen with just talk!! It happens with action and needs to happen NOW!… #BLM”

The NBA was quick to find a solution and had already given out jerseys to the teams containing slogans such as “Liberation, Enough, Respect Us” and many more.

The NFL has come in last place in this situation, it seems as if the only two things they have allowed for their players is for them to kneel during the National Anthem and also for them to wear the name BLM on the back of their helmet.

Is this Season Tainted?

With the Lakers making their way to the Finals without any real challenge, Sports Illustrated came out with an article titled “Would Championships This Season Be Legitimate?”

Before the bubble was even created, Shaquille O’Neal also said, “What if we come back and a Team that wasn’t supposed to Win Wins?…there’s going to be an asterisk behind that Championship”.

The concerns were unwarranted because before the NBA was shut down, the Lakers had the best record in the Western Conference at 49 wins and 14 losses, and they, along with the Bucks, were favored to win the championship going into the playoffs.

The same was true in the NHL, where the league went to a modified playoff format. Tampa Bay, which was a 6-1 favorite to win along with Boston, captured the Stanley Cup.

The only season that is somewhat tainted was baseball’s, simply because the amount of games they were to have played this season were cut down from 162 to only 60. They are missing almost a third of their games, but the playoffs were expanded, which pleased many fans.