Among Us Takes Over the Internet 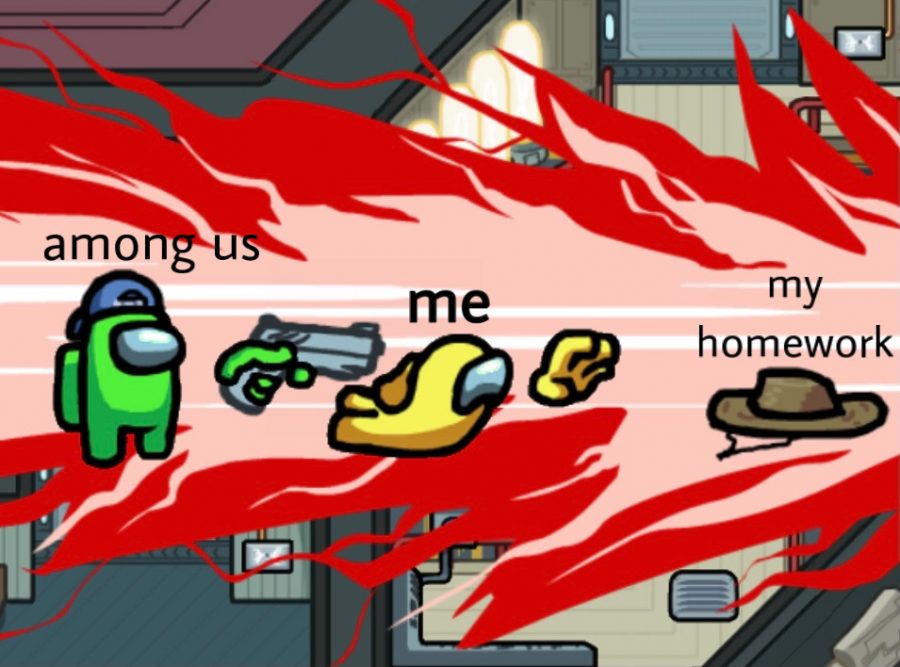 Everywhere you look, everywhere you turn – TikTok pages, YouTube recommendations, Instagram memes, Reddit subreddits – you name it, it’s there, Among Us. Among Us took the internet by storm this Fall. With its initial release in June of 2018, it has exponentially grown to be one of the most popular games in all of the internet. But what exactly is Among Us?

WHAT IS AMONG US?

Among Us is a social deduction game with added aspects from stealth and puzzle games. The game takes all that and crams up to 10 people into one of three interactable-paranoia-inducing maps. It takes the fear of not knowing who to trust from Mafia, the ability to eliminate your targets with stealth from Hitman, and throws minigames at the player which bears some resemblance to minigames from Warioware.

The game allows users to play locally or online, although online seems to be the most popular approach. Players can either join a public lobby with total strangers or join a custom lobby with friends. The game reaches a higher level of competitiveness and excitement when playing amongst friends, especially when doing so with a form of voice chat like Discord, Facetime, or Instagram.

I believe the game’s replayability is one of its strongest aspects. With several rulesets to choose from, the possibilities seem endless. If you’re playing with your friends with two imposters, rounds will always have the added variability and randomness, making no two rounds the same despite playing with the same group of people. And even if you decide to play with one imposter, you can mess around with the rules to change the pace of the game by manipulating the player’s speed, amount of tasks, and even their field of view.  One can heighten the suspense by making the votes anonymous and even removing the ejection confirmations to make the game more suspenseful.

The setting of the game is one of the several variables that can also be altered before the start of a round. By selecting a map, the host is able to modify the setting that the participants will play on.

The first and most recognizable of the three maps is a moving spacecraft named “The Skeld”. The spacecraft has a total of 14 rooms, 3 unique tasks, and cameras to function as the ship’s security system. It’s the simplest and least complicated of the three, but can still create interesting scenarios and gameplay.

The second of the three maps places the crew in a space station high above the Earth’s atmosphere. The station contains a total of 13 rooms, 5 unique tasks, and door sensors which function as this map’s security system. It’s roughly the same size as the previous map, but its change in layout offers a change in gameplay and strategy. Personally, this is my favorite out of the three maps.

The last of the three current maps place the crew on a research facility on the planet “Polus.” The map has 15 rooms and offers loads of space in-between them for the imposter to cover up their tracks. The map offers 11 tasks unique to the facility and brings back cameras, with a twist, behaving differently from the ones found in “The Skeld.” This is as of now the biggest of the three maps and gives the player more room for trickery and less room for claustrophobia.

The game itself is free on mobile and $5 on PC, but beyond that, the game offers smaller, optional transactions for features such as exclusive hats, costumes, and even pets. Besides that, in-app purchases don’t really affect gameplay and are solely for cosmetic purposes.

TO WRAP IT UP…

Among Us was like a sanctuary to us all this quarantine. It helped us get through boredom and helped us pass the time with friends. The idea, graphics, and overall premise of the game is very simple and not too complicated to comprehend. It has seemingly endless replayability with new content still being added. The only downside I can think of is that it’s not on more platforms. It’s by far one of the best things that the year has reintroduced to us and in my opinion one of the top games of this year, as to why I have no other choice but to give the game a 10/10