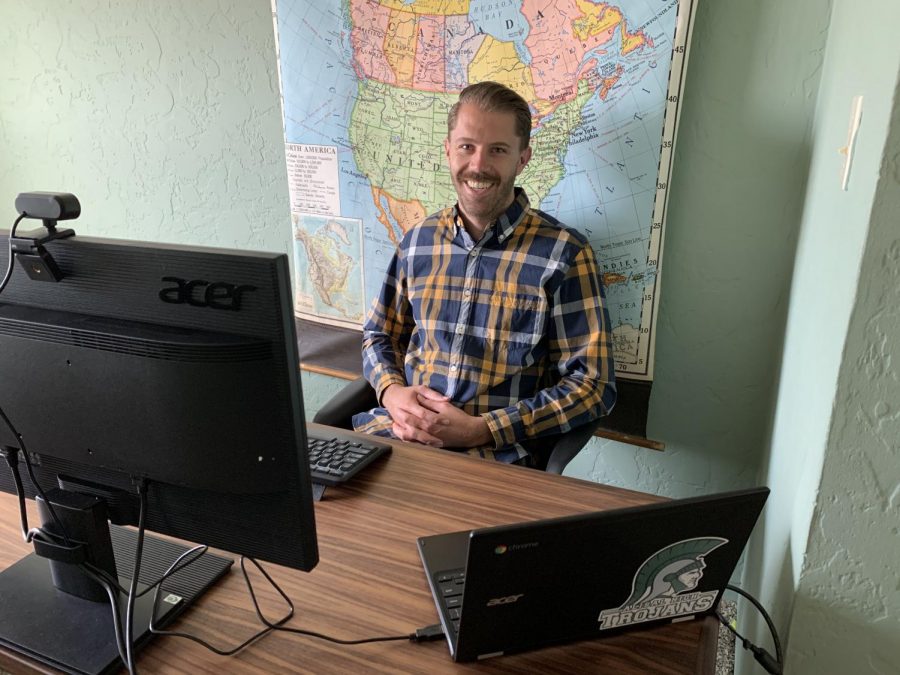 History teacher Zach Jensen likes the idea of having three classes rather than the usual six but thinks there are other challenges with the schedule. “I like the fact that we have the afternoons for support time with students and to work on prepping, grading, etc, because it means students and teachers aren't required to be in front of a computer from 8-3. However, the fact teachers have had to shorten their year-long course into a semester is another layer of adjustment that has been challenging. Cutting material and adjusting the schedule, in addition to creating digital lessons, has been stressful and something it would have been nice to avoid,” said Jensen.

Quarantine has changed everything, especially how the school looks. School has moved from in-person instruction to distance learning and from six classes to three.

The new schedule starts at 8:10 am and ends at 1:10 pm. The three classes are 75 minutes each, with a 30-minute advisory period. Every Monday is asynchronous.

The district decided a three-period block schedule, where a whole year is covered in a semester, would help ease students back into school and make distance learning more effective. The first half of the year are periods 1, 3, and 5 and the other half of the school year will be periods 2, 4, and 6.

History teacher Zachary Jensen says he likes the schedule we currently have. He likes the idea of having three classes rather than six. He also likes the idea of Mondays being asynchronous because he can get more work done. He misses having a prep period each day in which he got grades done and he got to set up his lessons for the day. Jensen would have liked the schedule a little more if there had been a slight tweak. ¨I would prefer to have classes on Monday and then Fridays for asynchronous, so then when we have a three day weekend it would feel more like an actual day off.¨ He believes the schedule is working so far because students don’t get to sit in front of their Chromebooks for six classes every day.

However, not all teachers are happy with the schedule. English teacher and yearbook adviser Mick Battaglini has mixed feelings about it. “I understand why they wanted three classes, but it makes it difficult on AP students to squeeze a year into a semester and for fall semester students to go without instruction for four months prior to the test.” As for the yearbook, that was a harder pill to swallow. “Yearbook is a difficult class in general, but now you add that we have to count on other people for the pictures and I can only have the class for half the year, makes it almost impossible.” The administration understood the challenges and placed his yearbook/journalism students in his Advisory class so he could have them all year. “It’s not ideal, but it was definitely better than the alternative,” he said. Battaglini said that despite the obstacles, he has confidence in his staff and that they will produce a quality yearbook.

Junior Brianna Hernandez also likes the schedule. She says it’s good because there’s only three classes. She dislikes that some of her teachers teach a little too fast, so she ends up not understanding what she’s being taught. In order to fully understand she attends office hours to make up late work or retake a quiz. She likes that in advisory Ms. Mason connects with the class about topics like French movies and French music. Brianna says, “She shows us French music once a week and movies once in a while. Mostly when French 2 / 3 are watching them. She’ll show us trailers for movies as well. We learn about being kind and being responsible in the advisory activities, but she’ll follow up on why it’s important.”

Counselor Laura Jimenez says she dislikes the schedule but likes the fact that students get to focus on half of their usual schedule. She fears there isn’t enough time for teachers to teach their students everything they need to know. She said, ”Will they truly be prepared for the following courses? Also, everything moves so much quicker.” In her advisory period, they like to use the chat feature on Google Meet to answer questions much faster. If the class still has time on their hands, they like to share out and have actual conversations on the topics at hand. She also likes to use Go Guardian to keep her students on task. Being a counselor and having an advisory is a change for her building bonds with students as she wouldn’t normally see the same students every day. “In a normal school setting we do not have a classroom; therefore, having advisory changes our roles immediately as we are now also teaching on a continuous basis. Having the ability to meet with the same students every day does lead to creating stronger bonds with those students. You get to know them on a personal level at a quicker rate. Normally those types of bonds can also be made in a traditional school setting; however, they may take longer to build as you don’t see the same students every day and don’t always have the opportunity to get to know students on a personal level.”

Senior Brianna Alvarado dislikes the current schedule because at times she has to stay on her computer from 8 am-11 pm in order to complete her assignments. One positive thing she says about the new schedule is that she gets to focus on three classes instead of six. She likes the idea of having an advisory period because it’s a break from schoolwork. Also, she says office hours are working for her, but staring at a screen for so long has caused her eyesight to worsen. As a part of Link Crew, the current schedule interferes as she says, “So far Link Crews’ biggest challenge was the transformation from in-person to virtual, especially because we were looking forward to the big orientation. Luckily, this year we had amazing Link Leaders who adjusted perfectly. Another challenge we have is having freshmen being shy and not participating all the time, In my opinion, this would be so different if we were in person, but due to our circumstances, we just need to work with what we have and try to make that one on one connection virtually.”

Another benefit of the schedule is that teachers have office hours and intervention time to help students from 1:40 to 2:59 daily. Math teacher Gary Golub has no complaints of his office hours, “It’s fine. For my classes, it’s mainly used for make-ups on assessments. And not so much for tutorials since the vast majority of my students are doing well.” That’s not the situation with Mr. Jensen, as his students don’t really show up to his office hours. Jensen says. “I think that it is a good idea to have the time available, but in my experience students have not been showing up very much for either. I contact students for intervention support, but have low success rates of attendance, and some students attend my office hours, but it doesn’t seem like they turn in very much work as a result. I don’t know what the solution is, but it does not seem like either are working for my classes as intended.”

All in all, there are mixed emotions on the schedule. Reactions on the advisory period are also mixed, with people saying that it’s helpful because it’s a break from doing school work and others say it’s unnecessary. Junior Zamanta Garfias says, “I think that advisory is just a way to involve people, but it is a waste of time in my opinion. It is not necessary for my A-G or for my high school requirements. I could be doing homework or taking a nap during that time.” On the other hand, junior Jennifer Arciga says, “I personally like advisory because it’s a class where the teacher doesn’t assign assignments, but we can catch up on classes and ask for convenient help.”