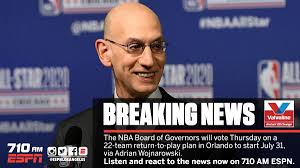 The 2019-2020 NBA season was cancelled on March 11, 2020 because Utah Jazz Center Rudy Gobert tested positive for Covid. On June 4, the NBA had a comeback plan for the NBA. The plan was to restart the season on July 30th, but only twenty-two teams would play the rest of the regular season at Walt Disney World’s ESPN Wide World of Sports Complex in the NBA bubble. They reserved three hotels at Disney World, where the players were to quarantine and stay in for three months. The teams would play eight games counting towards their record for the regular season, and then the top 8 teams in each conference would participate in a standard formatted playoff. In the bubble, the players were tested daily for Covid and were restricted to the Disney campus. The NBA finished their season and had the playoffs in the bubble, which ended with the Los Angeles Lakers winning their 17th title on October 6.

With Covid still being an issue, the NBA needed a plan for the season to happen. Luckily the National Basketball Players Association board of representatives voted on November 5,2020, to approve a plan for a Dec. 22 start to the season that includes a reduced 72-game schedule, clearing the way for the league and union to finalize details on the 2020-21 season, the NBPA announced.

With Covid and the delayed finish of the 2019-2020 season, it’s gonna be a while until the NBA is back to normal. In all honesty, as long as there is basketball and players are safe I’m happy. The NBA did a good job keeping players safe in the bubble, but now that teams will be playing all over the country it’s going to be harder to maintain. The reduced offseason is good for the NBA to get things back to normal, but bad for teams that made the playoffs because they’re going be tired and have less time to heal injuries.  The Heat and Lakers will only have a 77-day offseason. As long as the NBA contains Covid breakouts the season should go smoothly.

After a long season, the 2020 NBA Draft finally happened. The top three picks were inevitable – Anthony Edwards (1), James Wiseman (2), and Lamelo Ball (3). Edwards will be paired up with the young duo of Karl Anthony-Towns and D’angelo Russell in Minnesota, Wiseman will join Steph Curry and the Warriors, and Lamelo Ball will try to be the star the Charlotte Hornets desperately need.

Not a lot of big names or signings this offseason but some surprising moves are Montrezl Harrell, betraying the Clippers and signing with the Lakers to agree to a two-year, $19M contract, Houston Rockets trading Russell Westbrook to the Washington Wizards for John Wall, and a 2023 protected first-round pick, and Anthony Davis signing a five-year extension worth $190 million dollars to stay with the Lakers.

The plan for Covid is straightforward, any time a player tests positive for COVID-19, he will have to go through a series of steps before being able to play again. If the player is asymptomatic, he must sit out for 10 days from when first testing positive, then pass a cardiac screen and, finally, work out alone at the team facility for two more days before being allowed to return to full team activities, assuming there are no issues. If the player is symptomatic, he must sit out for 10 days from when symptoms subside, then follow the same path as asymptomatic players. If a player gets a serious case of COVID-19 up to and including going to the hospital, he would have to work out alone for three days, rather than two, before being cleared to return to team activities, assuming everything checks out. Basically, fans can expect that if a player tests positive, he will be unable to play for at least two weeks, and if he shows symptoms, that time frame could easily grow longer.

Going into the 2020-2021 the Lakers are still the favorites because they got better in the offseason with the signings of Montrezl Harrel and Marc Gasol their center position got better, but they did lose Dwight Howard to the 76ers and traded away Javale Mcgee. They also got Dennis Schroder via trade.

The Warriors were supposed to be playoff favorites with Steph Curry and Klay Thompson coming back from injuries, but Klay Thompson tore his Achilles tendon and is expected to miss the whole 2020-2021 season. Steph Curry, Draymond Green and rookie James Wiseman will have to adjust without him. Although the Warriors did get Kelly Oubre Jr via trade to pair up with Andrew Wiggins in the wing positions.

The Nets were the 7th seed without Kevin Durant and Kyrie Irving missed most of the year. This is the first year with both healthy, Durant haven’t played since June of 2019 is 100% and ready to go for the 2020-2021 season. This duo will have something to prove because Durant has never led a team and Irving has been talked about being a locker room problem, although this team has no third star this team has depth.

At the end of the day the NBA is just basketball, but players use their image to promote things like Black Lives Matters, some fans think the two things should separate keep politics from basketball and vice versa. In my opinion, players can say what they want. They worked all their lives for fame. The NBA has been the model for sports when dealing with Covid but the reasoning might be that teams sizes is the reason because NBA rosters are only fifteen players as the NFL is fifty-three. If all teams and players follow the Covid protocols the season should go smoothly and more fans will be allowed in games as the season goes on.