Creating a Safe Place for LGBTQ+ 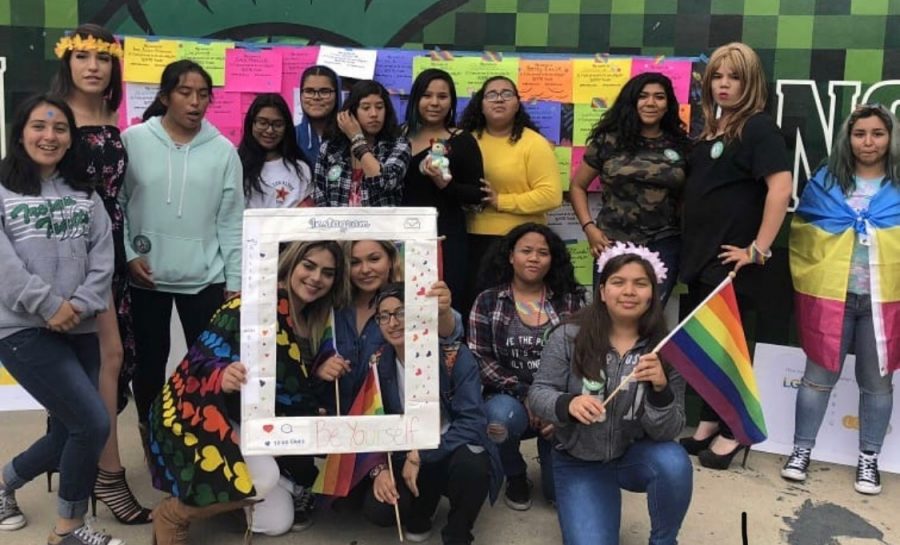 During Ally Week in October 2017, members of the Be Yourself Club pose in front of messages of support for the LGBTQ+ community. Club adviser Jaqui Gallardo said the group has continued to grow despite the pandemic. “They're just happy to be in a space where they can bond with each other and talk about LGBTQ+ issues,” she said.

Creating a safe space for students has always been an important thing within schools, regardless of gender and sexuality. The queer community has held a strong fight for their rights since 1969 and nothing will stop that fight. Even in the city of Salinas, queer students have fought to have their own safe space.

While schools should provide safe spaces for students, they don’t always do so. So it has been up to students and staff to create them. In 2015, the Be Yourself Club was created to support LGBTQ+ students.”It all started when I came out to Dr. Bernasconi, [my] Freshman Seminar teacher through my letter of introduction,“ Uriel Fletes explained. “She wanted to know more about me and hear my story.” From that point, the idea just sparked, the club was born. “He and Kevin Nolasco, who was a sophomore at the time, plus several other students co-founded the club, naming it the Be Yourself Club, which was a name used for the La Paz Middle School’s original GSA,” Bernasconi explained. Fletes himself stated that our campus was not used to queer students being out, “We received a lot of pushback from very machista students and a few staff.” Regardless of pushback, he ignored the comments and continued with the club so he could fight for their rights. “The right to be who you are. The right to Be Yourself.”

The club progressively made queer students more comfortable with being out and helped normalize different sexualities and break gender norms. It went from a small after school club to a club that had the ability to advocate and raise awareness for the community. “Each year, the BYC created a Dia De Los Muertos altar of LGBTQ+ youth who had passed away due to bullying or depression,” Bernasconi said. “By raising awareness, tolerance, and acceptance for our LGBTQ+ youth, we are able to help build a stronger community where ALL our young people are supported… when our youth thrives, our community thrives.”

At the time that the club was started, only Alisal had a BYC, but now most schools in our district have one. “Our annual district GSA gathering expanded. It went from a little gathering to provide a safe environment for our youth, to a youth summit,” Fletes said. The youth summit provides information and resources for the LGBTQ+ youth, along with that the people who participate will be able to meet new people and they will interact with people from neighboring cities and will provide a safe space for everyone regardless of gender and sexuality.

While the club has grown and changed, it has also had a change in advisors.  In 2018, Dr. Bernasconi left and gave English teacher Jaqui Gallardo the place as the BYC advisor. “With very limited knowledge in terms of logistics, I did what I could do to keep the club going,” said Gallardo. She was lucky to have a determined club staff – River Murillo, Zoe Mendez-Sosa, and Yliana Rodriguez. All helped her to be more informed about the community and helped everyone to stay motivated. The three of them developed a better sense of leadership and helped her become more independent when it came to the club. Gallardo said, “I’m honestly still learning, especially with the most recent changes that have occurred due to the pandemic.” She added that “The biggest struggle has been adjusting to the changes that we often don’t expect in life.”

Covid had definitely impacted the club. It has caused a loss of members, but it also created a new wave of members. “Everything is online now, and that’s appealing for some, but not everyone,” Gallardo said. “None of the club members have mentioned any concerns… they’re just happy to be in a space where they can bond with each other and talk about LGBTQ+ issues.”  River, the club’s president, stated, “There is no struggle, to be honest. Yes, there have been moments of stress, but all the members have me and I them.”

As in any struggle for rights, the need for allies is important. Gallardo believes that anyone, regardless of sexuality and gender, can join their club. “We need allies too and it’s nice to get support and build our community where it’s okay to be yourself,” she explained. The stigma around the LGBTQ+ is something that they had worked around throughout the problem. “Last year, a student came up to me and was very bothered that I carried a Mexican Rainbow Flag,” she had said. With that situation, she sat down and talked with the student about the flag. Although she says that there are people who still hold bias towards the community, she says that there is still growth, that no matter what she hopes that there will continue to be growth so that everyone can be together and free.