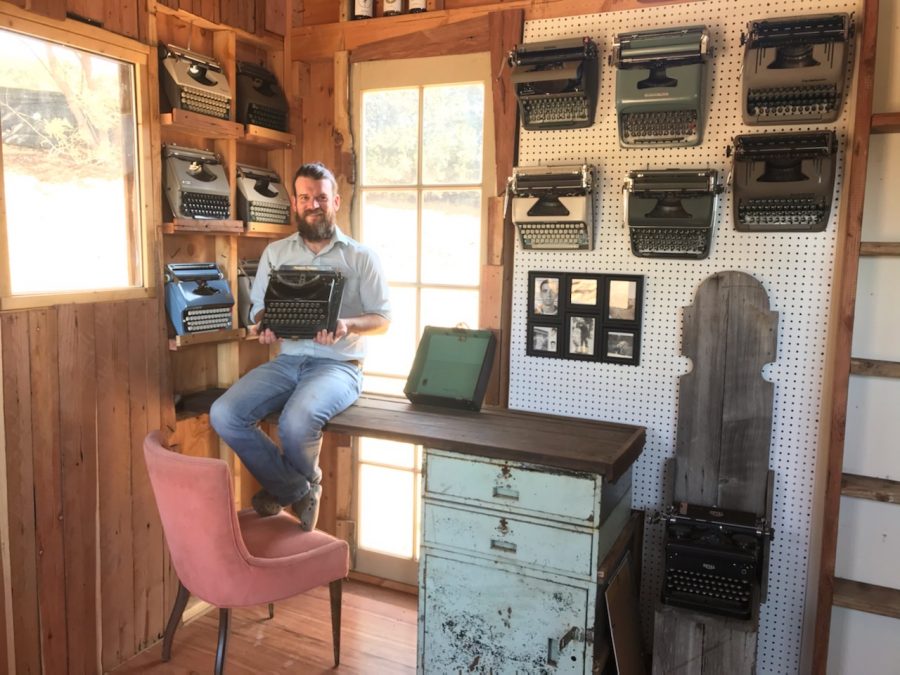 Mr. Dixon showcasing his typewriter collection in the shed he built over the summer for them.

Humans are collectors. We collect everything. Starting a collection has its perks like sparking creativity as collecting sparks new ideas. It also gives a desire for knowledge. One may be collecting items related to their childhood items they admire.

Many people have a personal connection with what they collect. Some go out and purchase their collections while others take the time to look for their pieces. Collections might include one specific item or many items, depending on one’s interests. In an informal survey of ninety-eight people, collectors said they collected everything from baseball cards to bird wings.

Starting in the third grade, senior Jennifer Santiago has collected twenty-one dolls, mainly from the Ever After High and Monster High lines. Jennifer remembers getting her first doll saying. “My mom bought it for me after a lot of nagging, she’d think they were creepy but i wanted one because they were kind of the new trend at school.” She looked forward to getting a new doll every couple of months. She loved having a diverse selection of toys growing up. Like any other child she found joy in receiving a doll she wanted. She still has interest in dolls as she says,” In the future, I’m planning on starting to collect these dolls again, specifically Ever After High since that franchise resonated with me more.”

Some people enjoy a more diverse collection. A collector for over 25 years, Eric Dixon has a huge collection of records, video games, typewriters, and books. Dixon has been collecting for over 25 years and has collected thousands of pieces for his collection. Some highlights of his collection include the first US edition of 1984 by George Orwell, several original Blue Note jazz releases from the ’50s, a Ben Watt record that took fifteen years to find, and Valkyrie Profile for the PSOne. He prefers PlayStation consoles but has a bit of everything saying, “I usually buy Playstation consoles, but I own everything except for X-box stuff and some handheld consoles.” He also owns NES, SNES, Sega, GameBoy, GameCube, WII, Playstation 1, PlayStation 2, PlayStation 3, PlayStation 4, and Sega Dreamcast. Lots of his records were given to him, Dixon says, “A lot of the records were given to me by friends, family, and people my family knows. These are mostly classic rock records.” These records include artists like The Beatles, Pink Floyd, Velvet Underground, The Rolling Stones, and others. Typewriters seem to find Mr. Dixon as he has fifteen but now only uses two. His favorite piece is his typewriter that his grandma gave him. When asked why, Dixon said “She knew that I was getting into collecting them, so she gave me her typewriter when I was at her house visiting. I remember feeling excited and honoured because she told me the story of how long it took her mother and father to save up for it and that it had been something she had been asking for for over a year. She was born in 1923. She kept asking her parents for a typewriter for over a year. They bought her a second-hand typewriter and gave it to her for Christmas in 1932.” Over the summer he built a shed that now houses his typewriters. The shed comes with its positives; with no electricity, Dixon is at peace while writing.

Many collections start as gifts. Miyra Cernas Angel’s collection of jewelry started when her mom gifted her a pair of earrings. She started her collection a little over a year ago. With a total of 21 pieces of jewelry, she has focused on her collection during these hard times. Her collection includes two bracelets, five rings, nine pairs of earrings, and three necklaces. Other pieces were also gifted to her. The rest of her collection was bought in either thrift shops or jewelry stores. Miyra has a passion for her collections as she says,¨I get to admire the jewelry and I love the way it shines and looks.¨

Senior Zaira Hernandez has a collection of earrings. Her collection was started over two years ago. In two years, she has managed to collect 40+ pairs of earrings. Her inspiration for her collection came from a pair of earrings she saw while attending a carnival. Since then she’s purchased her earrings from jewelry shops she goes to and shops for them online as well. When asked what she enjoyed about her collection she said, ¨I like jewelry and there are some really cool designs.”

Growing up a huge baseball fan, history teacher Brad Ashby has an impressive collection of baseball cards, as well as a collection of pocket knives. He still collects modern baseball cards, but his collection is made up of cards from the 70s and earlier. Most of his cards are from the 50s and 60s, with some even from the 30s. His impressive card collection doesn’t stop there as he mentions, “My oldest card is a T206 card from 1909.” A few of his cards are priced in the $1000 mark with the most expensive being priced at $2300.His other cards are valued in the $20-$500 marks. He focuses on completing full sets of Topps cards. He managed to complete the 1954, 1956, 1958-1960, 1962, 1964-2020 sets. Many of these sets are valued at $5000 and can go for more. He received his first pack of cards at age 5 in 1980. As for pocket knives, he collects vintage ones as well as some current ones.Mr. Ashby would get his knives while on vacation. His mother would love going into antique shops and would buy him one. As he grew older he would purchase a pocket knife whenever he traveled as a reminder of where he went. He uses all of his knives and carries a different one every time.

Sneaker enthusiast Jasmin Lopez has a sneaker collection that she started when she was only ten years old. Her collection consists of twenty pairs of sneakers. Her brother inspired her to collect sneakers, as the siblings would have conversations about brands like Jordan and Nike. Her first pair was a pair of Air Jordan 1’s gifted to her by a friend. Her most recent addition was a pair of Nike Air Max 97. She mentions a special pair of Nike Air Max 720’s  “My favorite pair are my purple 720’s because I wanted them for so long and after a long wait I finally got them.”