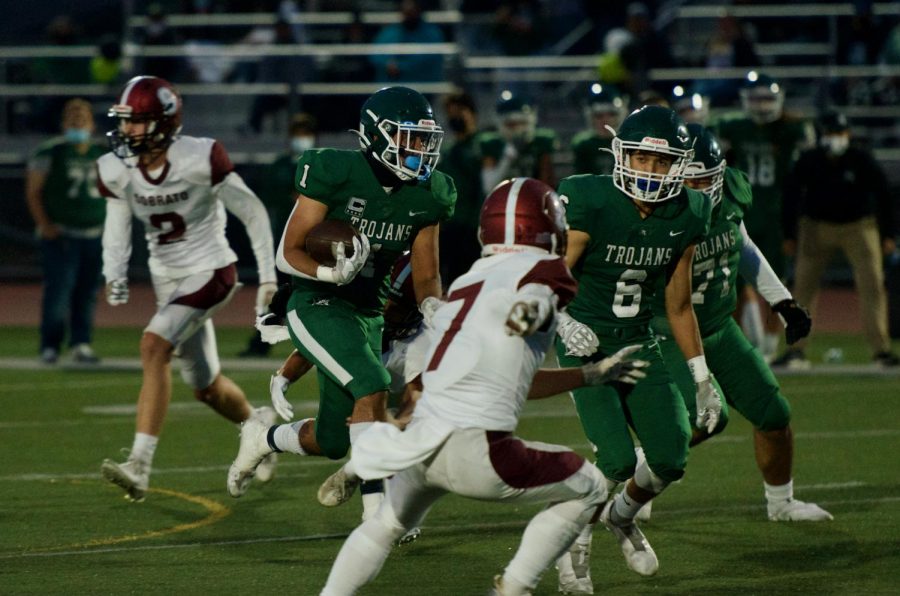 Running back Christian Campos scampers for 20 yards in the 38-12 victory over Ann Sobrato on September 12, Campos said, “We knew what we were supposed to do coming into the game, and we all performed.”

After a year without Friday Night Lights, football is back and better than ever, complete with fans in the stands and an opportunity to compete in the toughest division in the area.

For Coach Cesar Chaidez, he focuses on ensuring that not only him, but his players as well are aware of what they are able to control. After eliminating the freshman program, he has had more time to focus on his JV and Varsity programs. By setting an environment where players are able to move up and get accustomed to playing on a higher level. He believes that by having his team and coaches, all on the same page and sharing transparency, they have what it takes to move forward, by focusing on the now, and controlling what they can.

One thing neither Chaidez nor the players could control was moving to the Gabilan Division of the Pacific Coast League, the toughest division with Palma, Salinas, and Aptos. The move was due to the team winning the league title back in 2019. Captain Shane Salazar said, “There is a reason why we are up in the division, [my] only concern is having players not being eligible to play, or quitting towards the end of the season.” Captain Christopher Muñoz adds, “The team seems more tight and hyped.”

The team opened preseason strong, going 2-0. Chaidez said, “We felt great that we were able to get the 1st two wins of the season. It has been a very long time since Alisal  has started the season 2-0.”

The league opener was a wakeup call as to how difficult the Gabilan Division is as the Trojans fell 0-38. Chadez said, “The loss vs San Benito was very frustrating because we kept putting ourselves in bad spots with turnovers, but our mentality is that we take the good with the bad, and when it’s bad, we learn from the adversity and move forward.

Their second game against Salinas was canceled due to Covid cases at Salinas, and while the extra week of practice helped prepare for Palma, the Trojans fell 14-55.

The team is 0-2 in league and the schedule doesn’t get any easier. “We believe that 5 wins will secure us a playoff berth. However, now that we have a 9 game schedule format because of the Salinas cancellation, we really don’t know exactly how many wins we need…a 4-5 record might get us in. A  5-4 record almost guarantees us a spot.”

The Trojans will have to battle every week to have a shot at the playoffs and they wouldn’t have it any other way. Chaidez sums up his goals for the team, “We want to compete, we want to win and we want to go to the playoffs.”