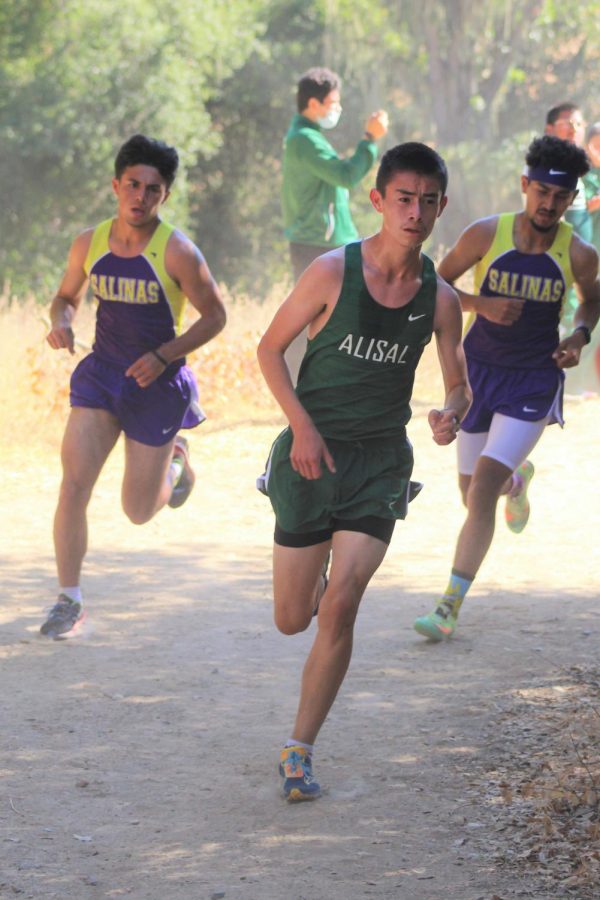 After a successful, yet stressful Covid season, the boys’ cross country team was looking to build on last year’s success.

Of the top seven runners, three – seniors Angel Gonzalez, Leonel Garibay, Emiliano Ramirez – returned from last year’s undefeated squad. They were joined by seniors Armando Nava and Emiliano Garcia, along with junior Harry Ordiano and sophomore Nathaniel Ruiz. Muñoz hoped to see the boys end up in 1st place, but only asked “the boys to compete at their best.”

Early on, the team struggled to match last year’s success. They finished third in the first Center Meet, but they bounced back in the second and third Center Meets finishing first at Center Meet #2 and and second behind Salinas High School during Center Meet #3.

“After Center Meet #1 I felt a little concerned, but I knew we could bounce back [at least finishing second in the league] and I knew that we still had a chance to finish first [in league],” said Muñoz.

They were ranked 2nd place in this division, and they still had a shot at winning league with a first place finish at the PCAL championship on October 1st at Toro Park. Garibay said the team felt confident going into the championship because of their performance the prior weekend at the Mt. Sac Invitational.

After a very competitive season, the boys all ran personal records at the league championship race, but even then it wasn’t enough to help them win the title. They came in second to Salinas High. “It was definitely a bummer, but at the same time looking at the results and how they ran, every single one of them ran a PR (personal record) and that’s what we ask of them, as long as they give it their all, that’s what really ultimately mattered,” said Muñoz.

This year’s team made it to CCS. As they prepare to run on Saturday, November 13, they go in with hopes of coming out as part of the top ten teams. “Based on our times throughout the year, we’re going to have to have some really huge breakout for any of the guys to go to State, it’s possible but it’s going to have to be the race of their life… Our goal for the boys’ team is definitely top ten,” said Munoz.