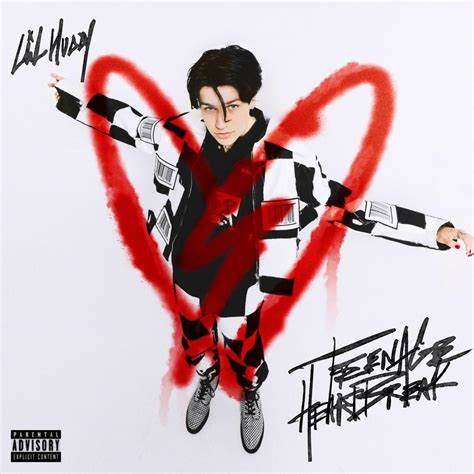 Cole C. Hudson aka LILHUDDY, is an actor, social media personality, and a singer. Hailing from Stockton, CA. Music first called to LILHUDDY as a kid, as he religiously listened to the likes of blink-182, My Chemical Romance, All American Rejects, Black Sabbath, Michael Jackson, and 5 Seconds of Summer. Teenage Heartbreak is his debut album.

After racking up 100 million streams in less than a year and receiving acclaim from Vogue, Interview, i-D, Los Angeles Times, PAPER, Nylon, and more, LILHUDDY looks to assert himself as a pop punk idol on his 2021 full-length debut album, Teenage Heartbreak [Immersive/Sandlot/Geffen Records].

Hailing from Stockton, CA., Cole C. Hudson aka LILHUDDY, is an actor, social media personality, and a singer.  Music first called to LILHUDDY as a kid, as he religiously listened to the likes of blink-182, My Chemical Romance, All American Rejects, Black Sabbath, Michael Jackson, and 5 Seconds of Summer.

At the same time, he developed his voice by singing at home. In 2019, he attracted legions of fans on TikTok. However, he carefully leveraged this presence to actualize his lifelong dream of making music. Right out of the gate, he turned his biggest idols into early champions. MGK tapped him to star in his musical film experience, Downfalls High, and Travis Barker got in his corner as a mentor and producer in addition to drumming on the bulk of the material.

“Teenage Heartbreak” has 11 tracks, most of which are very fun and upbeat songs that romanticize the feeling of being a teen.  There are also slow songs such as “How it ends” and “No More,” which have darker lyrics talking about dealing with depression and a breakup.

Of the 11 songs, 5 stood out to me – “Partycrasher,” “Headlock,” “Don’t Freak Out,” “America’s Sweetheart,” and “21st Century Vampire.” due to them being, in my opinion, the more memorable songs on the album. The mixture of the musical composition and lyricism helps to develop a sense of familiarity with the genre that the album falls under.

The song “Partycrasher” is a perfect example that demonstrates a “Party Anthem”, meaning it’s a song you would typically hear playing in the background of a party. There are some similarities to Good Charlotte’s  “The Anthem” track from their album “The Young and The Hopeless”. They sound similar in terms of the backing track and the rhythm of the  lyrics. That’s not to say that it’s a bad thing, but it does make it sound a little bit generic. The main riff resembles that of the track “Dear Maria” by All Time Low which is typically referred to as a Pop Punk or Punk band, which is something that LILHUDDY is aiming for in this album.  This song in my opinion, is one of my top 5 songs to listen to in the album, it’s catchy guitar riffs and teenage-esk lyrics will most likely make an impression on you.

After listening to “Don’t Freak Out” I particularly enjoyed the beat composition and the main verse, although I personally found the song to become repetitive especially in the beginning of the song, and although the beats and rhythm were good, I think the lyrics could’ve been worked on a bit more to avoid sounding like a broken record. Although there are tracks from different artists that can make lines that are repetitive sound good, for example the verse “All the other kids with the pumped up kids” which is repeated seven times with slight variations on every second repetition of the verse in the track “Pumped Up Kicks” by Foster the People does sound good. In comparison, the opening verse and bridge of “Don’t Freak Out”,  specifically the beginning of the line that being, “ Don’t Freak Out” is repetitive, but the lyricism in the rest of the track is great and it’s worth the listen .

“Headlock” is a song that is relatable, the lyrics talking about regretting a relationship and dealing with a break up. The tracks’ melodic and hard drumming accompanied with the grungy  guitar rhythm, and crisp vocals make for a catchy, depressing, and relatable song.  The song sounds similar to “Smile Like You Mean It” by The Killers. The similarities are very apparent but it doesn’t take away from the song, although “Headlock” has a more of a gritty sound and different lyrics, the structure and tone of the song is the same overall.  This is definitely one of the best tracks on the album and is a personal favorite of mine.

“America’s Sweetheart” is definitely a heartfelt and emotional song, it’s acoustic sound sounds great and the vocals on this track are definitely the best in the whole album. The entirety of this song is definitely on another level, the mixing on the vocals sounds natural and LILHUDDY definitely demonstrates his singing abilities. The track is slow and enjoyable and talks about feeling alone and frustrated with your partner to the point where whether they are there or not it seems as if you are alone. This track is enjoyable for anyone who listens to it and although I’ve heard many “unplugged” versions of many songs this is honestly very unique, the only song that I think might come close in terms of having that vibe I should say is the acoustic version of  “Tears don’t Fall” by Bullet for My Valentine. “Americas Sweetheart” is a great song that has really impressive vocals and is definitely out to put you in your “feels.”

“21st Century Vampire” is another great song from the album. The heavy bass, gritty guitar with occasional pick scratching, devolving solo, and the intense drumming gives this song such a great tone, the clashing of all the instruments doesn’t sound messy or like the different tones are bleeding into one another. The instruments are distinguishable even throughout the chorus and bridge. The lyrics are great, they are very punk or “emo” based but in the best way, they aren’t the stereotypical lyrics that are associated with Emo or Punk songs. This song puts a spin on those genres and stands out among other similar songs such as “All in my Head” by Smile Empty Soul or even songs like “A Place where you belong” by Bullet for my Valentine in terms of the guitar solo.  The only thing that I noticed was that the structure of the song was similar to “Xerces” by Deftones, but with its own twist and different lyrics. This is definitely worth listening to and maybe even adding to your playlist.

While LILHUDDY might not be my cup of tea, I think “Partycrasher” is my favorite song from the album due to its similarities to the Pop Punk and Punk Rock genre. The punk sound of the guitar which can be heard in tracks like “Bored to Death” by Blink 182 which is regarded as a Punk Rock/ Punk Pop band is a great example.

Although the album on its first play through might not be the best, eventually (after you listen to it two or three times) it grows on you. It’s as if it’s an album that is bleak and generic, but after your second pass through you pick up different things that you didn’t hear the first time, and you begin to appreciate the sound design for the backing tracks. Trust me, I listened to the album three times and I’m still discovering different notes or ad libs that I didn’t realize were there on my first or second pass through.

I would give Teenage Heartbreak 7 out of 10, it definitely has some gems in there, but some of the songs would’ve been better with revision.